The 10 Most Beautiful Catholic Churches in California 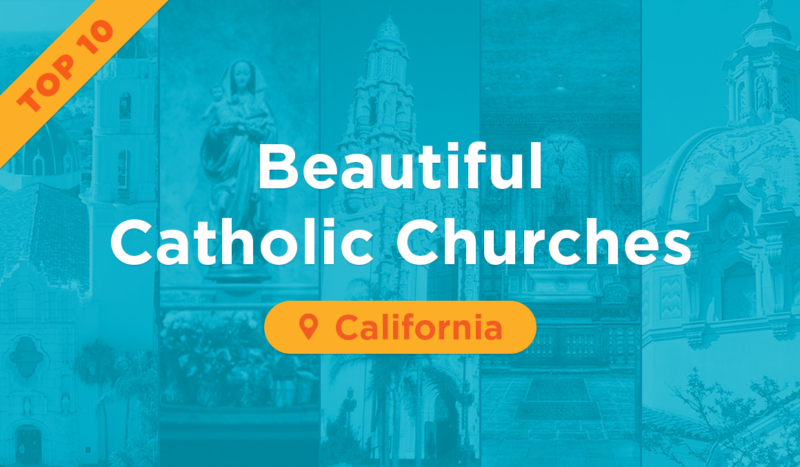 California is a land of Catholic heroes and saints – dating back to long before the pilgrims ever set foot on the East Coast. Here (in no particular order) are 10 of California’s most stunning Catholic churches, which recall an amazing history and hold out the promise that saints are still in the making in the Golden state. If you have your own favorite that’s not included here, leave it in the comments below!

St. Dominic’s Church is truly a “sermon in stone.” Designed in the English Gothic style by Arnold Sutherland Constable, its soaring buttresses house numerous side altars, a baptistry, a carved rood beam, a high altar, and a stone ambulatory. Beautiful stained glass windows light up the interior and illuminate dozens of statues. The parish community is thriving as well and includes the novitiate for the Western Dominican Province.

The towering gothic National Shrine of St. Francis of Assisi has been a fixture in San Francisco since the mid-1800’s and was rebuilt in its current form after the 1906 earthquake. Known for its dazzling murals illustrating the life of St. Francis, it also boasts exquisite stained glass windows depicting Gospel events. The church holds first-class relics of Sts. Francis and Clare of Assisi, and St. Anthony of Padua, making it a perfect pilgrimage site. The shrine also houses a full-scale and exact replica of the Porziuncola chapel – the tiny church rebuilt by St. Francis outside of Assisi.

San Diego’s Italian immigrants built Our Lady of the Rosary as a tribute to their homeland and a familiar place where they could gather as Catholics in a strange land. A century of candle smoke, incense, and the liturgical art abuses of the 1960’s and 1970’s obscured the church’s original beauty, which was largely forgotten. But in 2021, a restoration team rediscovered and saved hundreds of breathtaking murals, classic Italian statuary, colorful stained glass, and gilding. Today the church stands in San Diego’s Little Italy as a worthy testament to the Catholic Church’s rich artistic heritage.

Set on the University of San Diego campus, the Immaculata’s vibrant blue dome and Spanish-style bell tower draw the eye heavenward over the rolling southern California hills. The building’s cruciform shape recalls the Passion of Christ and houses 20 side chapels. The Immaculata’s breathtaking wooden crucifix was hand-carved in Oberammergau, Germany. The church is relatively small, seating just 900, but every detail is exquisite and of the finest material. It is not to be missed on your next trip to San Diego!

Designed by Duncan Stroik, an American architect at the forefront of the classical ecclesial architecture revival, Our Lady of the Most Holy Trinity was dedicated on March 7, 2009. Presenting classical lines, a bell tower reminiscent of the California mission churches,  and a beautiful dome, the chapel confirms that Christ is the center of this college campus. Light fills the interior, at the center of which sits a majestic baldachin that recalls St. Peter’s in Rome. This chapel is in every sense a “teaching church,” and every detail honors the Trinity.

St. Andrew Church offers Americans on the West Coast a tour of two of Rome’s most beautiful Romanesque ecclesial buildings. Its exterior, built in the Romanesque tradition in 1927, is a replica of Rome’s Santa Maria in Cosmedin, while its interior recreates the Basilica of Santa Sabina. The structure has seen significant restoration over the last 20 years, including the uncovering of historic murals and the cleaning of the magnificent Stations of the Cross that line the nave. The most recent updates, scheduled for completion in May 2022, include returning the tabernacle to its original palace of honor behind the main altar. The vibrant colors of the murals by Carlo Wostry and the marble columns make the church glow with jewel-like intensity.

Known for the annual return of the swallows on St. Joseph’s Day, the Serra Chapel at Mission San Juan Capistrano is the only extant Catholic church in which St. Junipero Serra himself celebrated the Holy Mass. It is also the oldest standing building in the state. Its high altar from Barcelona, Spain, is carved of cherry wood and overlaid with gold. The small chapel has been lovingly maintained and Mass is still celebrated there regularly.

Declared a minor basilica in 1997 by Pope St. John Paul II, St. Joseph also serves as the cathedral seat of the diocese of San Jose. Its exterior is unique among American churches, with its complex array of cupolas, finials, and towers all surrounding a massive central dome. The white interior walls contrast beautifully with the painted statues and stained glass windows depicting saints and Biblical figures. Its historic Odell organ is the last of its kind in the United States.

St. Vincent de Paul Church epitomizes the Spanish baroque style, with an ornate bell tower and 45-foot diameter dome over the cruciform shape. Behind the altar, a gold reredos rises around the tabernacle, decorated with painted statues of ten saints and multiple tiers of gold-covered columns. The hanging lamps and wooden beams throughout the church emphasize the Spanish heritage of the Catholic Church in Los Angeles.

The interior of the chapel at the Mission Santa Barbara – known as “the Queen of the Alta California Missions” – boasts the quiet, serene beauty of the original Spanish mission’s design. Simple tile floors and colorful paintings point the eye directly to the tabernacle above the high altar. A painted statue of St. Barbara stands under the crucifix, flanked by statues of St. Mary, St. Joseph, St. Dominic, and St. Francis. The chapel’s distinctive, neoclassical facade overlooks the lovely Mission grounds – including a Moorish fountain – and 12 acres of peaceful gardens for prayer.

California boasts hundreds of beautiful Catholic churches. Don’t see your favorite here? Leave a comment below with a link!