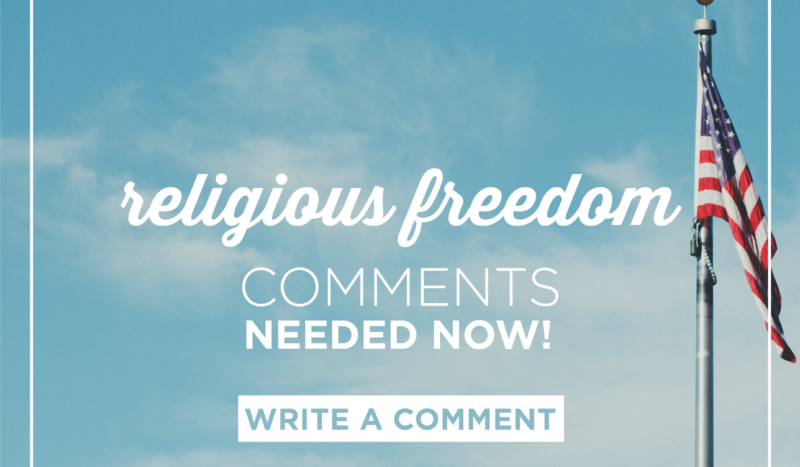 Religious organizations that partner with the government should receive the broadest religious freedom protections permitted by law.

But this new proposal is not final yet.

Like many processes in our federal bureaucracy, the implementation of such a rule requires a formal period where the public is invited to submit their comments on the proposal.  The proposed rule is open for public comment — but only for a few more days.

As you can imagine, there are plenty of proposed rule changes for our federal government. Most of them receive very few comments.

But this proposal is different. The ACLU and the Human Rights Campaign (pro-LGBT group) have come out against this proposed religious freedom protection.

The gay lobby is mobilizing their activists to register their opposition to this rule change. There are over 23,000 public comments.

Can you take 3 minutes to help us show that Americans support this new religious freedom protection?

It’s simple. Just CLICK this link, and say that you support the new proposed rule on civil rights protections for religious organizations.

Here’s a brief history to help understand why this proposed rule is on solid ground:

Acting Secretary of Labor Patrick Pizzella said: “As people of faith with deeply held religious beliefs are making decisions on whether to participate in federal contracting, they deserve clear understanding of their obligations and protections under the law.”

There are several instances where the federal government recognizes that the best organization to partner with is a religious ministry.

But left-wing activists want to seize on that partnership – through federal lawsuits – to force religious organizations to denounce their own teachings.

And these left-wing extremists don’t care if their lawsuits would hurt the victims of sex trafficking.

The Department of Labor is putting forward a proposed rule to ensure strong legal protections for religious organizations.

Quite simply: The Trump administration did its part.

Now it’s time to do ours.