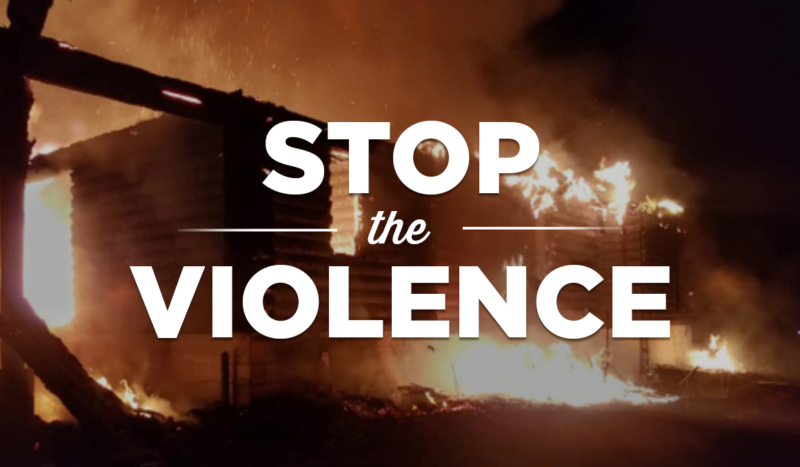 On Wednesday, we announced our single largest media campaign ever – with a commitment of $1 million – to bring needed pressure on President Biden and those in his administration who refuse to speak out against the rise in abortion terrorism targeting judges, churches, and pregnancy resource centers.

Maybe you know the stats already. But we can’t repeat them enough:

And here’s the kicker…

While there are some exceptions, the vast majority of these cases have not had any arrests or prosecutions for these crimes.

We’ve written to the attorney general. We organized a coalition of groups urging him to act. We’ve lobbied the White House. We’ve called on our leaders to address this pattern of vandalism and violence. But alas, they have other priorities…

… like using the FBI to investigate parents concerned about CRT in schools and the sexual exploitation of their children.

These are dark and violent times. And our leaders are failing us.

Most priests and bishops don’t know what to do.

So it’s up to us – the laity – to stand up and defend our churches, statues, shrines, and centers that support women in need.

Your support is what powers CatholicVote campaigns like this.

Now is the time to get in the fight.

Let’s make sure everyone sees this ad.

To top it off, this week faithful Catholics like you and me got accused of encouraging violence when a left-wing writer at the Atlantic compared the Holy Rosary to an AR-15 weapon. The enemies of the Church are on the march. And they think we won’t do anything about it.

Help us prove them wrong! Join our Champions Club as a monthly donor to help us defend our Church and what we believe in.

We just cut a check for $1 million to flood the airwaves and hold the Biden administration and the Department of Justice accountable. Catholic churches and pregnancy resource centers are under attack. Where is the FBI? Where is law enforcement?

Where is our “devout” Catholic president?

IMPORTANT: This is only the start. We’ve got a second wave planned. We simply cannot afford to let up. Catholics must unite and stand against these threats to our churches – and our safety.

Our newest ad has already been covered by major media outlets everywhere. It’s also spreading like wildfire on social media.

Here are some of my favorite responses:

CPAC Chairman Matt Schlapp after watching our ad tweeted: “How about a special Cong Committee on this come Jan? What are the links btwn this violence and Dem rhetoric and Act Blue fundraising? Get tough GOP”

And Doug Truax, host of Restoration PAC’s “First Right” podcast, told me: “I’m glad you’re highlighting the pure number of these attacks… I didn’t realize it was that many!”

We’ve got to keep this going.

Now is the moment to defend our Church!

P.S. It seems almost unbelievable, but this week the Department of Justice announced that they will form a special task force to prosecute anyone who threatens hospitals performing “gender reassignment” surgeries on children. Real violence should never be tolerated. But if verbal or written threats merit a task force, why not our churches and pregnancy resource centers that are now under real attack? Where is the task force to protect Catholics?

This selective weaponization of the Department of Justice must be stopped.

I need your support today for this campaign!