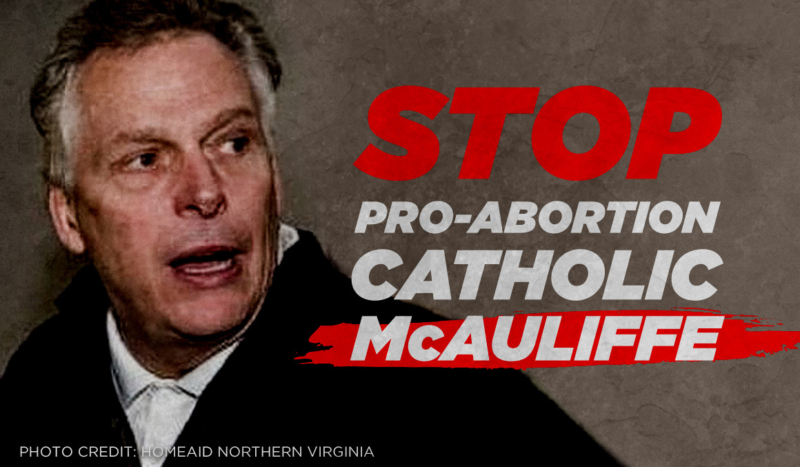 He makes Joe Biden look like a true “devout Catholic.”

McAuliffe is the Democratic candidate running for governor in Virginia — again (after previously serving from 2014 – 2018). The Virginia election will take place this November, with early voting starting today.

Here’s what you need to know:

McAuliffe has a long history in politics. He raised millions of dollars in dark money for Bill Clinton. In return, Clinton put McAuliffe in charge of the Democratic National Committee. Later, when Hillary Clinton first ran for president, McAuliffe was the chairman of her failed campaign.

You’d be hard-pressed to find another character with more sleaze, or a candidate more loyal to the pro-abortion movement than Terry McAuliffe.

Here’s the scoop on what we’re doing:

The election for governor of Virginia is just 45 days away.

Your CatholicVote Action Network is already on the ground. We’ve recruited over 100 volunteers (and we’re still growing!), and have identified over 250,000 Mass-attending Catholic voters that we plan to personally call, email, and text to make sure they get the truth — and VOTE!

We’ve got digital ads ready to go, along with a voter guide for Catholics to share. And it all starts today. Which is why we could really use an extra boost from you right now.

IMPORTANT: The election for governor of Virginia is always held 12 months after the presidential election. Because of Virginia’s proximity to D.C., the results are often viewed as a test of the new president’s popularity. Biden’s approval rating is now plummeting, and the latest polls in Virginia show this race a virtual tie. The Virginia election in November will be the first big high-profile referendum on the Biden presidency.

That’s why this race has national importance — especially for us Catholics.

Virginians will have the opportunity to reject transgender bathrooms, racism in our schools, and one of the most radical pro-abortion Catholics in America.

McAulliffe’s challenger, Republican candidate Glenn Youngkin, is pro-life. He has said: “As the next Governor of Virginia, I will proudly stand up for the unborn and their mothers. I believe life begins at conception. My views are formed not only by my faith, but by science as well.” And he’s promised to end all taxpayer-funding for abotion.

This race is winnable.

And we can make the difference!

Let’s make sure Catholics know the truth about Terry McAuliffe — and get out and vote!

Want to really help us do our job? Join the CV Champions Club. For just $10 a month, your support makes all of our work possible — not just now — but every month. We can’t do this without you.