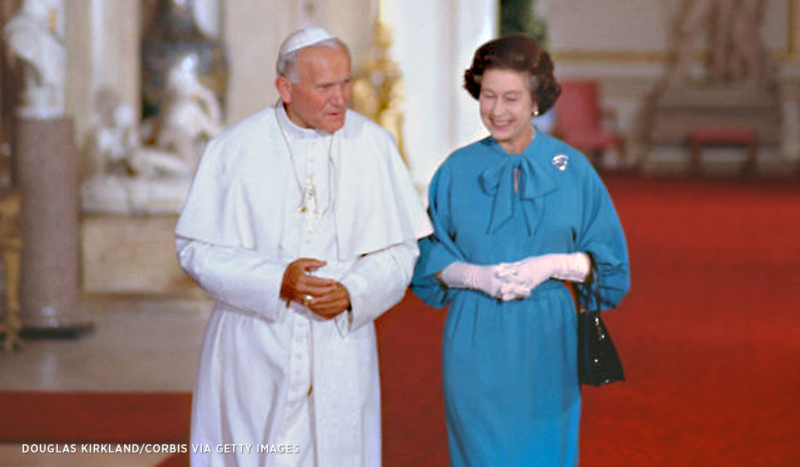 But did you know that Catholics have reasons all our own to mourn her passing?

Queen Elizabeth presided over a period of English history in which Catholics gained greater acceptance in public life than many thought possible after the 15th-Century rift between the Crown and the Roman Catholic Church.

The bloody dismemberment of the Catholic Church in England during the Tudor dynasty left British Catholics with targets on their backs. They suffered centuries of persecution, forbidden at various periods from holding Mass, serving in public life, or owning property.

Anti-Catholic attitudes persisted in England through the 20th century and even into the 21st. The last of Penal Codes against Catholics were only repealed during Elizabeth’s reign in the 1960’s. As late as 2013, English royalty wishing to marry a Roman Catholic were required to renounce their places in the line of royal succession.

In contrast to much of that history, Queen Elizabeth was radically conciliatory toward Catholicism, welcoming and commending Catholics for their contributions to Britain and the world.

Here are five prominent Catholics (plus a Catholic church) whom Elizabeth II honored during her reign.

In 1972, for his “services to English literature,” Elizabeth appointed J.R.R. Tolkien a Commander of the Order of the British Empire. Tolkien wrote, “But I was very deeply moved by my brief meeting with the Queen, and our few words together. Quite unlike anything that I had expected.” Tolkien, author of the Lord of the Rings trilogy, the Hobbit, and numerous other works of fantasy and scholarship, was a devout Roman Catholic and described his work as “fundamentally religious and Catholic.”

When Queen Elizabeth formally invited John Paul II to visit England in 1982, she made both Catholic and English history. It was the first time a pope ever set foot on English soil. She honored him with a hospitality and reverence that surely caused the English martyrs much rejoicing in heaven.

Just one year after the pope’s visit, the Queen honored Mother Teresa of Calcutta with the Order of Merit for her “outstanding service to humanity.” The little nun was only the fifth non-British citizen to win the honor. Mother Teresa accepted the award in a small private ceremony without speeches or fanfare. Her comment to the Queen was, “I accept it for the glory of God and also our work.” She was the first and only Catholic nun to receive this honor.

Days before his death from cancer in 1999, Queen Elizabeth honored Cardinal Hume with the prestigious Order of Merit – an award limited to 24 living holders. Hume had been a leader in the Catholic Church in England for much of her reign and had worked to earn greater public acceptance for Catholics. While he worked hard to undo the centuries of anti-Catholic prejudice, he also played fast and loose with Church teaching in order to gain acceptance. Nevertheless, the Queen’s willingness to recognize a Catholic archbishop was historic for its day.

Tony Blair formally converted to the Catholic faith after leaving office in 2007. The Queen awarded the newly minted Papist the highest level of knighthood, making him a Knight Companion of the Most Noble Order of the Garter. Oliver Cromwell would never have dreamed it possible.

The Cathedral of Westminster

Queen Elizabeth herself, though head of the Church of England, honored all English Catholics by attending the great centennial celebrations for Westminster Cathedral in 2003. The cathedral was the first to be built following the return of the Roman Catholic hierarchy to England after having been driven out by the Tudors. Although the Queen did not also restore St. Paul’s cathedral to the Catholic Church (the Anglicans kept it), she did enjoy the festivities. The chair in which she sat during the Mass is still on display in the church.