“Pope Francis made a significant rhetorical break with Catholic tradition Monday by declaring that the theories of evolution and the Big Bang are real, and remarking that God is not “a magician with a magic wand.”

“When we read about Creation in Genesis, we run the risk of imagining God was a magician, with a magic wand able to do everything. But that is not so,” the pope said at the Pontifical Academy of Sciences, during a plenary meeting dedicated to evolving concepts of nature. 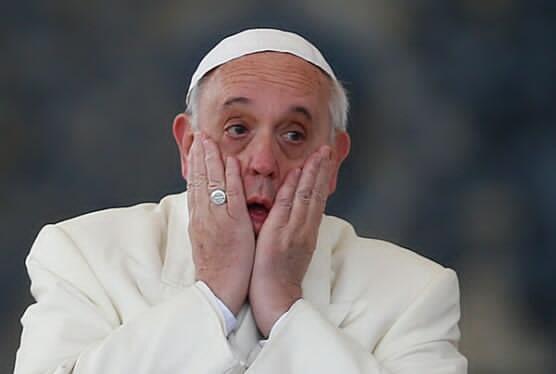 But wait, there’s more! Not only is the Pope breaking with Catholic tradition, but in doing so, he has…wait for it…repudiated his predecessor! Berger’s report continues: “Breaking with his predecessor, Benedict XVI, who arguably encouraged creationism and intelligent design theory, Francis explained that both evolution and the Big Bang are not incompatible with the existence of God.”

If the originator of the big bang theory, Fr. Georges Lemaître, were still alive, he would have been very amused. (Or maybe not.)

More from MSNBC: God “created human beings and let them develop according to the internal laws that he gave to each one so they would reach their fulfillment,” the pope said. “Evolution in nature is not inconsistent with the notion of creation, because evolution requires the creation of beings that evolve.”

Speaking of evolution, it would be nice if the media would drag itself out of the primordial ooze of ignorance and into the sunny uplands of basic literacy in religious matters. Or at least develop the ability to take a glance at Wikipedia.

UPDATE: Kudos to Elizabeth Dias at Time for bucking the trend of media malfeasance.