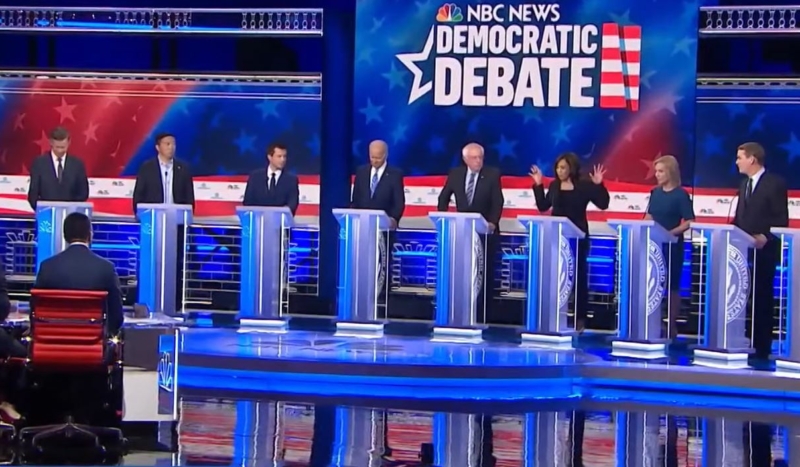 We begin again with the odd nostalgia that is NBC News. Their technical difficulties gave Dem Debate #1 a 1970s vibe. In Dem Debate #2, they seemed to be holding auditions for an Obama Administration cover band.

At least that was my sense when Chuck Todd asked the candidates to name countries with which they would “reset” relations.

Seriously, Chuck? Do you not remember Secretary of State Hillary Clinton literally giving her Russian counterpart a “reset” button? How did that work out?

A better question would have been, “If there is another ‘reset,’ which region of the world gets to be the next Crimea?’”

Here is my take on the second night’s candidates, in ascending order:

Eric Stallwell: I hereby grant him the Amy Klobuchar award of the second evening. He made no impression whatsoever.

Michael Bennett: I appreciate that he sounds like Bill Murray. Everyone loves Bill Murray. But he criticized “medieval” walls, thus losing the Catholic monarchist vote.

John Hickenlooper: What is it about Colorado governors who run for President? Richard Lamm ran in the 90s on the proud claim of having been the father of legal abortion. Hickenlooper last night seemed proud to have legalized marijuana. Perhaps he was high.

Marianne Williamson: There is something hilariously appropriate about the new-age guru of the Elizabeth Gilbert “Eat, Pray, Love” god-within school of Oprahness being a Democratic candidate for President. And what a perfect closer! She is going to beat Trump with love. So there.

Kristin Gillibrand: One of the three most annoying candidates for President, Gillibrand seemed to suggest that her female identity was somehow more authentic than that of women who support the Hyde Amendment. She probably considers trans “women” more authentically female than actual biological females who are pro-life. Because Democrats are the “reality-based” community, you see. The party of science. No ma’am, no ideological blinders there.

Pete Buttigieg: Another of the three worst. The media likes to run interference for him, knocking down unfavorable polls and claiming he doesn’t unduly highlight his homosexuality. In fact, it was an unprovoked attack on Vice President Pence over the matter that first landed Buttigieg’s campaign in the news. And he referenced his “marriage” twice last night, the only candidate to do so.

These are probably the things that have scored Buttigieg more Lefty money out of Connecticut than any other Democrat thus far. But as with so much else from the Democrats’ 2020 field, a pro-abortion, pro-LGBT candidate lecturing Christians on Biblical morality is not going to win over Trump voters. It’s going to have the opposite effect.

Bernie Sanders: He will be formidable, for a time, but ultimately a victim of his own success. The Party has largely moved in his direction and Elizabeth Warren articulates his ideas better than he does. There is nothing left for him to do except channel the guy who plays him on Saturday Night Live. By the end of the evening, that is what he sounded like.

Kamala Harris: The worst of the worst. Her attack on Biden failed but the media will describe it as a success. The kingmakers in the press and the party will pull strings for her as they once did for Hillary.

Dogged by decades-old accusations of having used a romantic relationship to advance her career, Harris said in her closer that she has “a 3 am agenda.” The SNL skits for that line practically write themselves. Or they would, if she were a Republican.

He didn’t look like Sleepy Joe last night. A lot of the old fire is still there. He won the debate by not letting the other candidates, particularly Harris, rattle him. And he had the strongest closer.

We tell ourselves that none of these candidates could win in 2020. But Trump’s opponents said the same thing about him in 2016.

So enjoy the circus. But, also, be ready for battle.