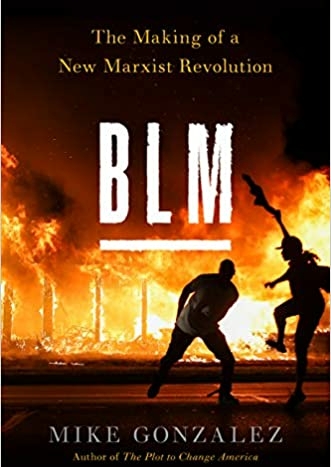 CV NEWS FEED // Americans embracing “black lives matter” as a slogan of unity will be shocked to learn the Marxist agenda of the BLM political movement that claims that name, according to a new book.

In BLM: The Making of a New Marxist Revolution, Heritage Foundation senior fellow Mike Gonzalez “dives into the radical underpinnings of Black Lives Matter and how the movement is exerting a malign influence on academia, corporate America, and pop culture” through a steady stream of propaganda that the media has largely failed to vet or challenge.

“Americans did not suddenly rise up in righteous anger, take to the streets, and demand not just that police departments be defunded, but that all the structures, institutions, and systems of the United States—all supposedly racist—be overhauled,” the Heritage website states of the book’s message.

“What the activists seek does not need to be our reality,” Gonzalez writes in the book’s introduction.

Gonzalez describes BLM movement leaders as “avowed Marxists” who seized on the police killing of George Floyd in summer 2020 to overthrow the American way of life. Taking advantage of the fact that no reasonable person could criticize the proposition “black lives matter,” he says the movement has used the phrase as cover to promote radical policies like “Defund the Police” that most black Americans do not actually support.

“He systematically reveals how these Marxists seek to transform America into something unimagined by the Founders and unrecognizable to most Americans today,” historian Victor Davis Hansen says in the book’s endorsements.

Even though many institutions have embraced the BLM slogan as a sign of solidarity with the struggles of black Americans since Floyd’s death, Gonzalez claims that the various organizations comprising the BLM movement have staged 12,000 political demonstrations and 633 riots precisely to overturn the social order.

“Black Lives Matter is a movement predicated on prevarication, and Gonzalez breaks down its dangerous falsehoods in hard-hitting fashion,” conservative pundit Ben Shapiro says in his endorsement of the book.

Gonzalez’s chapters contextualize the BLM agenda as the latest expression of failed Soviet infiltration and the 1960s counter-cultural movement that sought to divide Americans against each other in the 20th century.

Like Antifa, the umbrella “safe space” for American Marxists today, he sees BLM as yet another example of money from foreign interests and white elites seeking to destabilize the country politically through racial fearmongering. But Gonzalez also suggests ways to “school the revolution” by naming and resisting its agenda in a way the media and political establishment refuse to do.

Ying Ma, a policy expert and campaign manager for California gubernatorial recall candidate Larry Elder, says in an endorsement that she finds the book “a must read” for people who want to learn to “fight back against BLM’s effort to tear down America’s most fundamental principles and institutions.

On Sept. 7, Encounter Books made the hardcover of this work available on Amazon, where it has swifly become the #1 new release in political philosophy. Gonzalez’s well-researched pages deserve serious attention.