Morgan’s Place: Uniting the Pro-Life Movement and Works of Mercy 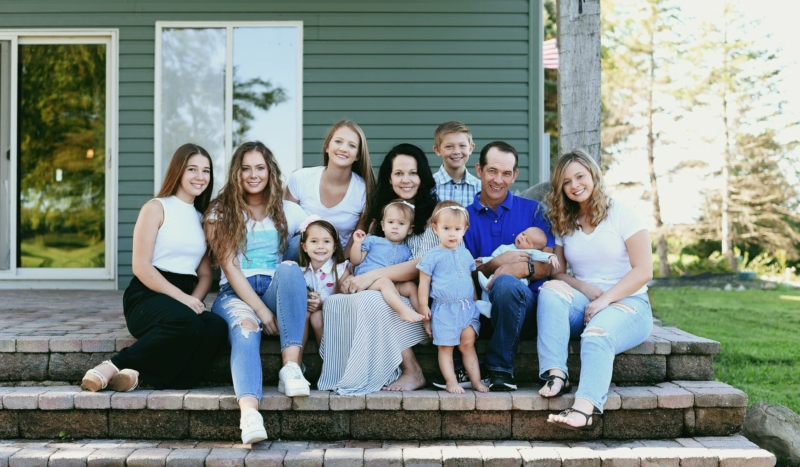 Nestled in the rural farm country of midwest Ohio, you’ll find the pro-life movement has strong roots. One could say they not only cultivate crops but also a culture of life.

Ohio is home to Nathan and Mollie Verdier and their 11 children—nine that run and two that fly. The pro-life movement is near and dear to Nathan and Mollie, and they’ve come up with a creative initiative to show the dignity and humanity of the unborn in the most unexpected way.

In 2018, the Verdiers decided they would dedicate 2.5 acres of their farmland to the burial of stillborn and miscarried children. The purpose is to make commemoration more accessible for those who’ve experienced the loss of a child in pregnancy. They named this future birth-loss cemetery Morgan’s Place.

How does a cemetery become a pro-life initiative? Let me explain.

Though we were knit together in our mothers’ wombs, it was not our mothers who called us to be, but God. We are created in His image and likeness, and therefore our bodies are His temple. Both in life and in death, we are called to treat each temple, each human body, with charity and respect.

In that understanding lies the pro-life movement. We are called to respect the dignity of human life, from womb to tomb, and part of respecting life is ensuring a dignified burial after death.

This amazing endeavor by the Verdier family was birthed from tragedy. Roughly 10-20% of pregnancies end in miscarriage, and in 2018, Mollie’s baby Morgan was one of them. With an immense desire to keep their baby close and also follow the Catholic Church’s teachings, the idea for Morgan’s Place Cemetery was born. In 2019, the Verdiers suffered another preborn loss. Baby Marion was one of three triplets, but unlike his siblings, he was destined to be born into the arms of our Lord. After the loss of baby Marion, the Verdiers felt even more determined to pursue God’s will by bringing Morgan’s Place to fruition.

On March 5, 2022, the Verdier family officially broke ground at the cemetery. Morgan’s Place Cemetery will be ready to give babies a much-needed final resting place by early summer. There is still a lot of work to be done and funding to be raised to complete Morgan’s Place. Beautification, a memorial wall and gardens, and a central memorial statue and seating area are all in the works! St. Philomena’s chapel will be built in Phase 2 to provide a space for funeral services. It will also have a meeting room for families to plan final arrangements and hold support meetings for families suffering in the aftermath of birth loss and abortion.

“There’s nothing harder than to call a funeral home and ask them to pick your baby up,” Mollie shared as she recalled making that phone call herself. The process of obtaining their baby’s remains and figuring out funeral arrangements was not only logistically difficult but deeply, personally horrible.

Mollie Verdier described how her and her husband’s personal experience helped them discover the different burdens families will have and need assistance with when faced with the loss of a child in pregnancy.

“Nathan and I, we went through a lot of hard times,” she said:

And so, all these different services that are coming to us, really, are actually burdens we had on us, but … for some people these aren’t burdens, they’re like, part of their grieving process, you know, their way to heaven. A grandfather might want to make his grandchild’s casket, but if they don’t, then we can take that burden off of them.

The Verdiers have seen an outpouring of support for Morgan’s Place.

Several funeral homes have pledged to donate cremation services. Caskets and burial gowns are being made at no cost. A donation fund is planned to help pay for beautiful granite grave markers.

But the materials are only part of the picture. If there was support or guidance on what to do after birth loss and how to grieve, Mollie and Nathan didn’t know how to find it. So they want to offer that support to other grieving parents.

Mollie explained how she and her husband, along with trained volunteers in bereavement care, want to be there for parents from the first “hello” to the final “goodbyes” with their unborn child.

“We can do everything for you, or we can guide you along the way and help you through the hard times. Be an advocate or grief companion,” she said.

The idea of associating with abortion clinics was—to say the least—off-putting to some. However, Mollie and Nathan do not see this as helping abortion. Instead, they agreed that regardless of the circumstances around a baby’s death, serving all babies in their final need is serving God.

Mollie and Nathan want post-abortive mothers and families to know that Christ loves them, and Morgan’s Place provides the dignity in burial that aborted children deserve.

To help with the healing process of post-abortive families, Morgan’s Place will use Cemsites.com—a gravesite mapping company that uses GPS points to locate grave markers—so that families can locate their aborted child buried at Morgan’s Place.

“I think that we can bring post-abortive families some mercy and some peace that they’re looking for, when they’re ready,” said Mollie.