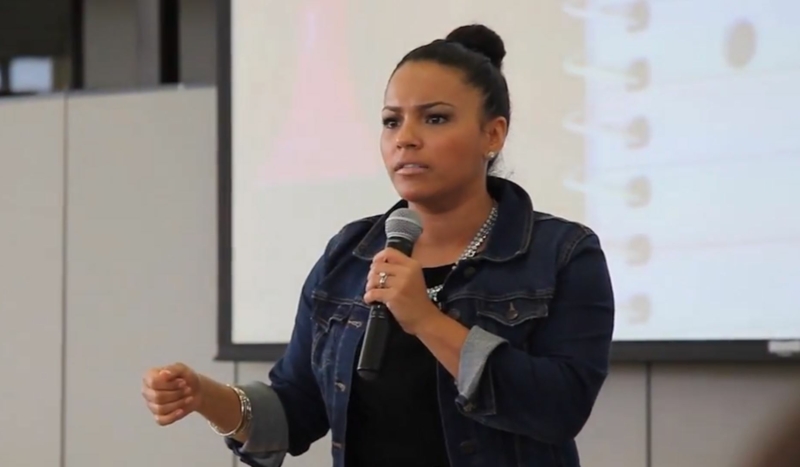 In the wake of new abortion legislation, the media are racing to cover actresses’ positive abortion stories, from Busy Philipps to Jameela Jamil. But there’s another actress telling her story – and it’s going unnoticed.

Unlike the other two, her story is one of pain and mourning.

Speaking out in support of abortion, Philipps and Jamil attracted the attention of countless outlets including ABC News, CBS News, Cosmopolitan, The Guardian, People, and USA Today. April Hernandez-Castillo, on the other hand, was covered by The Christian Post.

At the end of April, the 39-year-old actress, who has starred in films like Freedom Writers and TV shows like Dexter, spoke at the Q conference in Nashville, Tennessee. The Christian Post reported that April held nothing back as she introduced herself to an audience of hundreds.

“My name is April Hernandez-Castillo and I had an abortion,” she began her story.

20 years ago, when she was 19, she discovered she was pregnant. At that point, she was no longer in a relationship with the baby’s father – an abusive man who almost killed her.

When she found out, her friend asked the “$1 million question: ‘Are you going to keep it?’”

“Keep. It. As if I had an alien growing in my body,” April remarked. But after staring at her pregnancy test results, April had an answer.

She ended up at an abortion clinic in New York City, where a receptionist unsympathetically asked her how she would pay the $400 bill. Inside, she cried while seated among other pregnant women – some of them teenagers.

When it was her turn, April saw a sonogram of her unborn baby. “It was no longer an it,” she said, “but it was a human being.”

Even so, she didn’t change her mind.

“I still had to do it because sometimes when we find ourselves in desperate situations, we make desperate choices,” she said.

As she prepared for the abortion, her eyes latched onto a machine, and blood stains in the room. But the doctor reassured her, saying she would be done in five minutes and wouldn’t “feel a thing.”

After the abortion, the first words she uttered were, “I’m a murderer.” She felt like she and the other women there had been “slaughtered like cows.”

She only felt worse when a protester outside of the clinic tried to hand her a pamphlet as she left.

“When I refused, she looked at me. She said, ‘Oh, you did one of those. You’re going to go to Hell,’” April recalled.

At the time, April agreed with her. “I could never forgive me. I accepted that,” she said.

Following her abortion, April “swept it under the rug,” and moved on by focusing on her promising career and a new relationship.

But this relationship was different. Her boyfriend convinced her to attend church with him, and she did – even though she was angry with God.

One day, back in 2008, the pastor spoke about forgiveness.

“I remember reaching my hand up into the sky as if to rip Heaven apart and just pull it open and bring God down because I was desperate to be forgiven,” she said. “All of a sudden, I felt the power come down in my body and I fell to the ground in fetal position.”

“I wasn’t crying. My soul was sobbing. It was as if my womb, my uterus was sobbing,” she continued. She heard God telling her, “‘My daughter, I forgive you. I love you. But I need you to forgive yourself.’”

Afterwards, that same day, she had a sort of vision. She was surrounded by daisies when a young girl wearing a white dress appeared.

“She looked to me and she said, ‘Mommy, I forgive you. I love you,’” April said. “God was so good. He revealed her to me. And her name was Daisy.”

Years passed, and one day her husband snapped a picture of their daughter, Summer Rose. April said it captured the same exact vision.

She told her story as a call for compassion for other women.

“I understand that the topic of abortion is touchy. I understand that I am in a room full of believers, faith movers and shakers and yes we absolutely must fight for the life of the unborn child,” she said. “But I wonder, have we missed and failed the woman who’s terrified?”

She makes a good point – and the media should take note.

These are the stories the media miss: the women who are terrified. Instead they focus solely on the women who proudly share their abortion stories and herald their “choice” as the “best decision.”

Many in the media regularly overlook the women who regret their abortions, even as they speak up publicly. They also hide research on women harmed by abortion.

That needs to change.