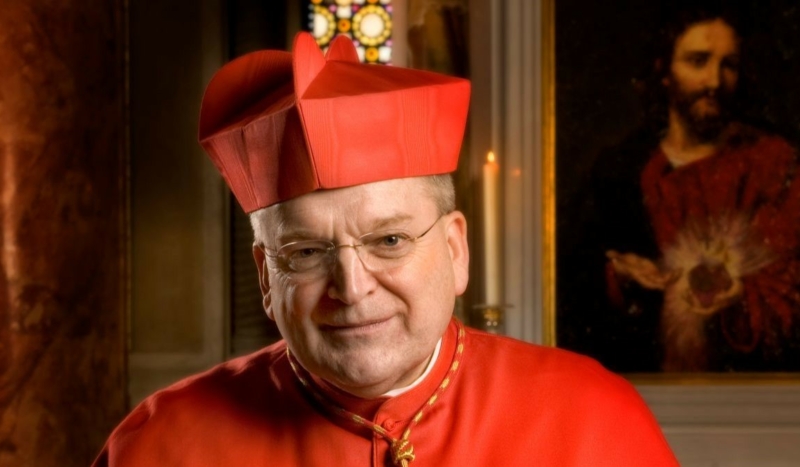 CV NEWS FEED // The media has eagerly publicized the grave Covid-19 illness of Cardinal Raymond L. Burke as the cautionary tale of another “vaccine skeptic” suffering for his stupidity.

Even as the hospitalized 73-year old struggled to breathe on a ventilator, Todd Richmond insisted on labeling Burke this way in the lead of his Aug. 16 piece for the Associated Press, where he wrote: “Cardinal Raymond Burke, one of the Catholic Church’s most outspoken conservatives and a vaccine skeptic, said he has COVID-19 and his staff said he is breathing through a ventilator.”

That same day, the headline of a PBS article put it even more bluntly: “Vaccine-Skeptic Cardinal Hospitalized with COVID.” While NBC also preferred the label “skeptic,” CNN opted to call Burke a “vaccination critic.”

According to multiple news outlets, Burke contracted the virus during a recent visit to Wisconsin, where he was then hospitalized. Burke first tweeted about testing positive on Aug. 10, followed by an Aug. 14 tweet from his staff on the same account that asked for prayers as it announced: “Cardinal Burke has been admitted to the hospital with COVID-19 and is being assisted by a ventilator.”

Cardinal Burke remains in serious but stable condition. He is receiving excellent medical and sacramental care. Please pray for his recovery, particularly through the intercession of Our Lady of Guadalupe, St. Joseph, St. Juan Diego, and St. Rocco.

Cardinal Burke’s office also asked concerned Catholics not to speculate and wait for updates through official channels, like the cardinal’s twitter account, and the Guadalupe Shrine in La Crosse: “The Cardinal’s family has also requested that only updates of significant changes in His Eminence’s condition be posted on the authorized platforms.  In humility, we understand that it is not necessary for us to know every detail of the Cardinal’s treatment.

At the same time, some Twitter users suggested Burke was getting what he deserved as a “pro-Trump” cardinal. Occupy Democrats, a grassroots political organization that supports progressive political candidates, published this unsigned Tweet on Aug. 15: “Pro-Trump Cardinal Raymond Burke, who spread the delusional conspiracy that the COVID vaccines contain microchips that allow Democrats to ‘track’ the vaccinated, is now on a ventilator fighting for his life after catching COVID. Play stupid games, win stupid prizes.”

While admitting it could not confirm whether Burke had actually been vaccinated, the left-leaning Religion News Service also labeled him in an article as a vaccine “skeptic.” It attributed this label to the cardinal’s moral objections over fetal stem cells being used in vaccine development and to Burke saying in a May 2020 Rome Life Forum that “vaccination itself cannot be imposed, in a totalitarian manner, on citizens.”

The RNS article also described Burke, who lives in Rome, as a “conservative” known to walk the streets “often maskless but always with his rosary in hand” — as if to imply the cardinal believes he can pray the virus away. But Cardinal Burke, also identified in these media reports as a critic of Pope Francis, often walks the streets of Rome praying the Rosary while wearing a mask.

More than an isolated example of “I told you so,” this public shaming of a former Vatican official and archbishop emeritus of St. Louis as an infected “vaccine skeptic” fits a recent summertime pattern in the mainstream media to feature stories about “vaccine skeptics” who languish on a ventilator and even die wishing they had gotten the shot. While the articles have tended to hold up ordinary people for public humiliation, they have also embraced public figures like Burke, whose status as a conservative and public critic of Francis apparently makes his suffering more newsworthy.

One thing seems clear at this point. If Burke recovers, news trends suggest the mainstream media will stop covering him. On the other hand, if Burke dies of the virus, Catholics may expect to see more mainstream coverage holding him up for posthumous public ridicule.