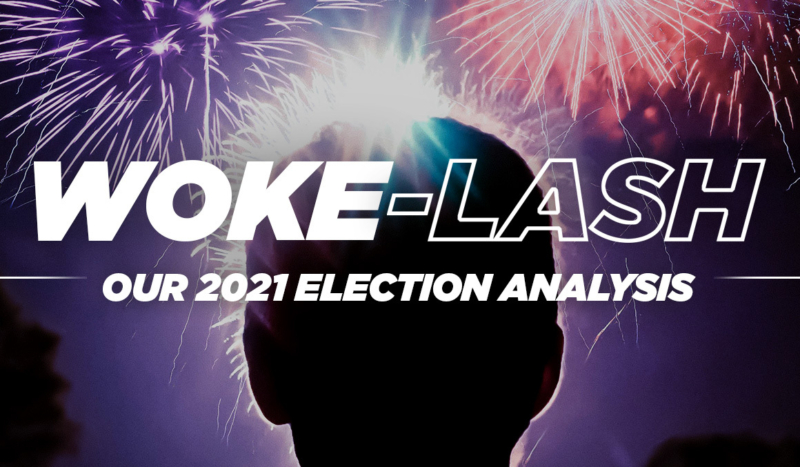 Politics can be cyclical.

Because the progressive Left thought their day had finally come. They believed America was ready for a revolution from top to bottom.

Despite the narrowness of their victories in the House and Senate last year, they believed the country was ready to go full woke.

Last night voters finally had their say. And their message was unambiguous: STOP!

Here are some of our key takeaways from last night:

LESSONS FROM VIRGINIA  A pro-life Republican winning in Virginia looked like a long shot earlier this year. But our team believed that the right candidate and the right environment could open a pathway to victory. Democrats went back to the tired playbook of “stop Trump!” together with abortion politics and racial division. The real fireworks started when parents began pushing back against school board tyrants, and pro-abortion “Catholic” Terry McAuliffe said parents were the problem.

Republican Glenn Youngkin leaned in. He defended the right of parents to decide what is best for their children. Youngkin stood firmly on the side of families against the Left’s new rule: “We know what’s best for your children. Get out of our way.”

Exit polls show Youngkin won Hispanics by 9%. And among voters who said abortion was their #1 issue, Youngkin won an estimated 60%, despite millions spent by McAuliffe on abortion ads, and media predictions that the Texas law would sink him. Underreported, but also a huge victory: Virginians elected pro-life Winsome Sears as Lt. Governor — the first black candidate to win that post. It can’t be said enough: the pro-life issue is a winning issue.

Our Catholic Vote Action Network contacted over 355,000 unique voters in VA, combining person-to-person calls, video and personal text messages, and digital ads. We held a rally in Loudoun County with parents, organized call parties, distributed voter guides, and contacted every Catholic voter in the state we could identify — multiple times. Your support made all of this possible.

COVID FATIGUE  The media has been hesitant to connect the dots. But the conclusion is obvious. From school board meetings, to mask and vaccine mandates, to gas prices, inflation, mental health, and polarization, COVID-induced interventions are a problem. And voters are done with it.

WOKE-LASH?  Last night was a backlash against virtue signaling wokeism. Even Al Sharpton said as much this morning. Too much talk, cancelling, and signaling. And nothing to show for it but division and ruined lives. Since the election of Donald Trump, the left has whipped the country into a frenzy over race, sex, and gender. “Identity politics” isn’t going away, but there are cracks in the foundation. In some places, big cracks.

EDWARD BURR  Who? Republicans in one state senate district in New Jersey nominated a truck driver who says he spent less than $10,000 on his race. His Facebook page simply read: “Blue collar with a strong conservative belief.” He is pro-life and a strong supporter of the 2nd Amendment. And he now appears to have defeated NJ Senate President Steve Sweeney. A good lesson for 2022: no race is “unwinnable.”

DEFUND THE POLICE  Who could forget the mayor of Washington D.C. authorizing groups to deface a public street near the White House by painting “DEFUND THE POLICE” on it? Left-wing agitators pushed their anti-police agenda everywhere, but nowhere more aggressively than in Minneapolis, where the tragic death of George Floyd occurred. Last night Minneapolis voters soundly rejected defunding the police by a double-digit margin.

The issue backfired even in Seattle — the epicenter of white radical progressivism. Voters in Seattle elected a Republican as City Attorney against a Democrat who wanted to abolish the police — the first Republican to win there since 1989. And it wasn’t even close. The margin was 59% to 41%.

IMMEDIATE FALLOUT  All eyes are on the 2022 midterms, and Democrats are in a panic. Politico blared this morning: “Democrats may be headed straight into a hurricane.” And for good reason. Looking at the election returns, Dave Wasserman of the Cook Political Report remarked: “Needless to say, tonight’s results are consistent with a political environment in which Republicans would comfortably take back both the House and Senate in 2022.”

Election prognosticators are adjusting their predictions — with the midterms now less than a year away. The Center for Politics now believes Senate races in Arizona, Georgia and Nevada are “toss-ups.” Our team now believes as many as 70 House seats could be in play next year.

While not a complete surprise, rumors swirled last night that Nancy Pelosi is telling colleagues she will not run for re-election in 2022. Can you blame her?

For Catholics, we know Our Lord’s Kingdom is not of this world. But we’re called to be salt and light, and to go and baptize all nations.

Especially the nation we call home.

Thanks for everything you do to make our work possible.

P.S. One last election day detail: Your CV team quietly worked on another race few are talking about. Last summer we teamed up with pro-life groups in southeast Pennsylvania to focus on the biggest statewide race on their ballot yesterday — a seat on the Pennsylvania Supreme Court. CV provided data, grassroots tools, and volunteers who contacted hundreds of thousands of voters over the last few months. Last night, pro-life Republican Kevin Brobson won a 10-year term 52%-48%.

Pennsylvania continues to be a critical state, with a top-tier Senate race in 2022, and will be decisive in 2024 … not to mention it’s a state led by a vicious anti-Catholic governor with presidential ambitions. We can’t be everywhere. But rest assured our team is looking out for you!