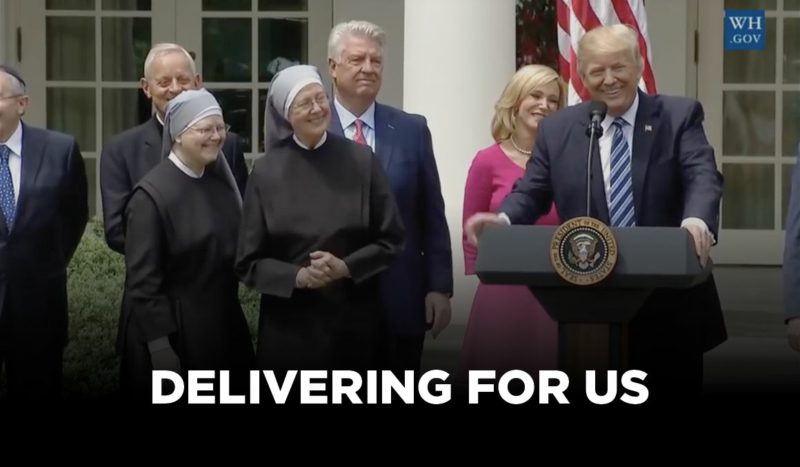 The headline from Politico says it all: “Trump looks to reward conservative Catholics for their loyalty.”

The article makes clear what I can personally confirm: the Trump Administration is actively working to deliver for Catholics.

Over the past year we have been working with members of the Administration to emphasize the priorities of Catholic voters. The foundational issues of life, family and religious liberty — along with the importance of restoring American solidarity by lifting up families and American workers.

We’ve explained our priorities. And they are listening … and delivering.

If the 2020 election will be won or lost in the Rust Belt — specifically in economically depressed counties throughout Pennsylvania, Michigan and Wisconsin that boast a sizable share of cultural and devout Catholics — the president can’t afford to have Catholics feeling left out…

Inside the Trump campaign, preparations are underway for a “Catholics for Trump” coalition and a series of events that will get the president and his surrogates in front of friendly Catholicaudiences. According to three people familiar with the planning, Trump is expected to deliver remarks in late March at the National Catholic Prayer Breakfast …
President Trump has delivered for Catholics, and we need to get the word out. This is why we are building a truly historic Catholic education and voter mobilization plan for November.

MORE GOOD NEWS: Thanks to you, I’m happy to report our staff is rapidly growing, including the addition of field staff in key states, along with former Representative Tim Huelskamp (R-KS) who now serves as a Senior Political Advisor.

You can read the entire article from Politico here.

Thank you for all that you are doing to make our work possible.