Grace and Courage in the Face of Rep. Sims’s Hypocrisy and Bigotry 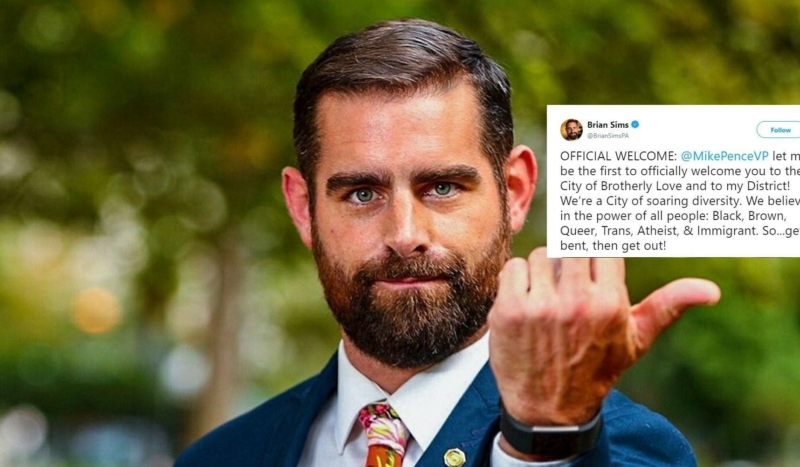 How many times do we as Catholics utter this word in a year?

How many times a year do we read it from a passage of the Bible at Mass?

“For by grace you have been saved through faith, and this is not from you; it is the gift of God.”

Who among us Catholics has not gazed upon the word painted on the ceiling of our churches, begging God to help us find the grace we so desperately desire in times of distress?

We say it fifty times in one prayer — the Rosary.

Hail Mary, full of grace, the Lord is with thee. Blessed art thou among women and blessed is the fruit of thy womb, Jesus. Holy Mary, Mother of God, pray for us sinners, now and at the hour of our death. Amen.

It’s one of the reasons why Catholics ardently pray the Rosary in front of Planned Parenthood clinics nationwide. We know that only through grace can our children be saved.

Grace is asked of all of us, rich and poor, powerful and not. That’s why when powerful Pennsylvania General Assemblyman Brian Sims bullied a Catholic woman praying her Rosary for unborn children outside a Planned Parenthood Clinic in his district in Philadelphia, the faithful Catholic’s response was nothing short of grace.

Rep. Sims, an LBGTQ lawmaker and proponent of LBGTQ causes who once famously flipped the middle finger at Vice President Pence’s visit to his district in Philadelphia, confronted this woman with the explicit intent to degrade and demoralize pro-life prayer warriors.

A powerful government official, twice this woman’s size, decided to make it his personal mission to throw every insult imaginable at this prayerful, graceful woman.

To make matters worse, he live recorded the entire confrontation, exposing the elderly protester to even more online abuse.

Sims shouted in the woman’s face as she held onto her Rosary and pushed his phone at her as she tried to keep her face away from the camera. Sims called her an “old white woman” whose Faith and Church, according to him, can only be responsible for the sexual abuse of children.

He called on those watching his video to donate money to the abortion clinic and demeaned the woman for “telling people what’s right for their bodies.” For nearly 10 minutes he hurled an appalling number of sexist, racist, and anti-religious attacks as this brave woman held on, with grace, for us all.

Prior to this disgusting display, Rep. Sims even offered to pay viewers of his live stream to reveal the identity of teenage girls who were also peacefully protesting outside the abortion clinic. You read that correctly–a powerful government official attacked teenage girls and an elderly woman praying the rosary, and called it justice.

To have the courage to keep silent and continue praying while such vicious and hateful attacks assail us is a beautiful example of the grace we aspire to embody as Catholics. It is with this grace and perseverance that we as pro-life Catholics must continue our fight for life.

There is a dirty little secret to Brian Sims’s tactics, however. Something the abortion industry doesn’t want you to know.  Its that no-show rates climb to 75% (according to Planned Parenthood’s own numbers) when mothers are met with people praying outside of their clinic. Brian Sims wants to shut down this life saving activism so he, the rich and powerful, can continue to line the pockets of Planned Parenthood and the abortion industry at large.

Abortion is the greatest human rights crisis and evil of our time. It’s up to us to end it–not with the vile smears and assaults our opponents use–but with grace and compassion for the most defenseless of us all.

I’ll close with a quotation from former Planned Parenthood director Abby Johnson, whose life was changed by the kind of prayer warriors Brian Sims shamed outside of the clinic today:

“Enough is enough with the excuses. Get out there at your local abortion clinic and pray. There is nothing to be scared of. Remember, fear doesn’t come from God. Don’t let the devil keep you from performing God’s work. BE the hands and feet of Christ. Don’t just claim to be pro-life in name only, BE pro-life in action.”