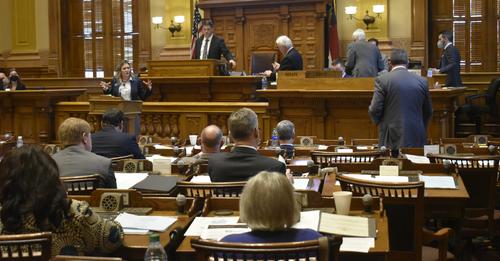 Georgia politicians are pushing legislation that would effectively require insurers to adopt ideas from the American Psychiatric Association (APA), which has been criticized for controversial changes in recent years.

Along with the APA’s diagnostic and statistical manual (DSM V), the World Health Organization’s (WHO) classification of diseases is also used to inform definitions of “mental health” disorder within the proposed law.

Both organizations received left-wing advocates’ praise for discarding the term “gender identity disorder” with “gender incongruence” (WHO) and “gender dysphoria” (APA). In explaining the change, the APA said it was focusing “the diagnosis on the gender identity-related distress that some transgender people experience (and for which they may seek psychiatric, medical, and surgical treatments) rather than on transgender individuals or identities themselves.”

According to CBS 46, the bill received overwhelming, bipartisan support in the state House of Representatives. But it could face resistance in the Senate as conservatives raise a variety of concerns.

CatholicVote has learned that the State Freedom Caucus Network will be signing a letter arguing that the bill “fails all tests for conservatives and Republicans.”

The letter adds: “It expands government, increases costs, enshrines progressive ideologies, and harms civil liberties. Republicans in the Georgia State Senate should send HB 1013 back to the drawing board and come up with legislation that better serves all Georgians, especially those who suffer from mental health and substance abuse issues. In the event that they are not up to the task, Governor Kemp should force them to reconsider their priorities by vetoing the bill.”

Besides relying on the APA and WHO, the act also includes spending and bureaucratic expansion that the letter says is a step closer to single payer health care.

“[W]e know that new mandates, a new commissioner for community health, and billions of dollars’ worth of loan forgiveness for mental health practitioners are leaning in one direction: towards the socialist single payer model preferred by progressives,” it reads.

Another part of the bill appears to lower the standard for requiring residents undergo inpatient treatment. Instead of defining an inpatient as someone who poses an “imminent” threat, the bill revises existing law to read “reasonable expectation that a life-endangering crisis or significant psychiatric deterioration will occur in the near future.”

The network’s letter expresses concern that the change in phrasing could later be used to infringe on Second Amendment rights.

“Georgia Republicans supporting this bill are signing their citizens up for a backdoor red flag law. Democrats who have taken issue with policing should be wary of this provision as well,” it reads.

The Georgia Recorder reported Thursday that senators are analyzing the bill with at least one Republican cautioning against demands for “perfection.”

“I want to make sure that the advocates behind me understand that this is a marathon. This is not a sprint. And we’ve got to stay focused,” Sen. Dean Burke reportedly said. “But remember, the enemy of good sometimes is perfection, and we need to make sure that we get to a place that we can move the ball this year.”