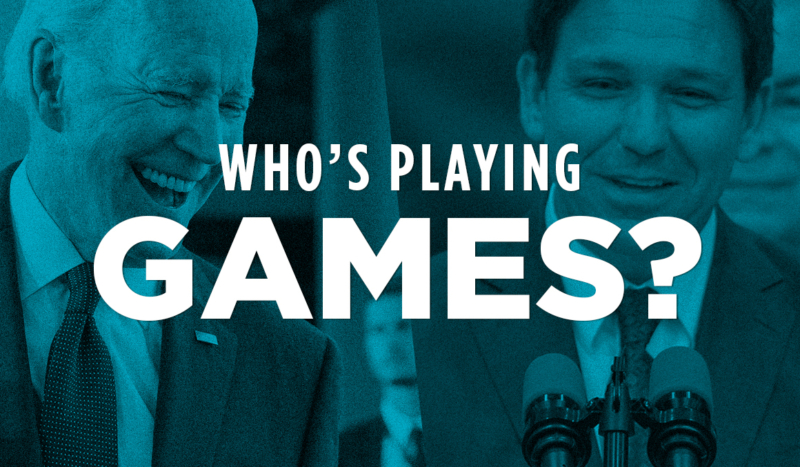 We dared to defend Gov. Ron DeSantis’ decision to invite 50 illegal migrant volunteers to travel to Martha’s Vineyard, exposing both the hypocrisy of the Left and the humanitarian crisis at the border created by the Biden administration.

Democrats are trying to portray DeSantis as an “evil genius” who used these migrants for a political “stunt.” Yet according to reports, none of the migrants were forced to travel to Martha’s Vineyard. In fact, MSNBC reported that the largely Venezuelan group was not only not angry at DeSantis, but “thanking him.”

The Biden administration has created a disaster of epic proportions at the border. According to the latest government reports, there have already been a record 2 million apprehensions of attempted illegal border crossers during this fiscal year alone, with thousands more being apprehended every day. And these numbers don’t include those that escape and are not apprehended.

Sources confirm that an entire network of migration is in place, stretching from Central America up through Mexico, and mostly controlled by brutal gangs, cartels, and traffickers.

Coyotes too are exploiting the crisis, with as many as 80% of women being sexually assaulted or raped according to some reports.

To drive home just how bad things are, Mayor Oscar Leeser of El Paso (a Democrat) says that as many as 2,000 migrants are flooding his city … per day. Leeser defended the policy of busing migrants to liberal northern cities, arguing that perhaps it would force Biden to finally show compassion and rein in the violence and chaos at the border.

Local officials in Martha’s Vineyard quickly admitted that they wanted the migrants to go someplace else. Within 48 hours, 125 members of the National Guard were deployed to move the migrants to a nearby military base. Presumably they will soon be transported elsewhere, perhaps back to the parking lot in San Antonio where they reportedly were staying before boarding the flight.

What none of DeSantis’ critics have mentioned is the fact that the Biden administration was already transporting tens of thousands of migrants to towns all across America on a regular basis. Yet when busloads are taken to Democratic-run “sanctuary cities” like Chicago, New York, or Washington, D.C., state and local leaders accuse border state governors of racism and political gamesmanship.

The irony is not lost on those paying attention.

Democratic governors and mayors admit the tiny number of migrants arriving in their cities are “overwhelming” local systems. They conveniently ignore the plight of towns in Texas and Arizona where not hundreds, but tens of thousands are arriving every month. These cities and towns are also home to Hispanic voters, who are now demanding change and voting overwhelmingly for Republican political leaders.

Which raises the question – do Democrats believe these Hispanics are racist too?

Worth noting is that none of the people now attacking DeSantis have accused the Biden administration of using migrants as pawns by gutting border security, refusing to enforce our nation’s laws, lying about border agents, and arranging covert, middle-of-the- night bus rides and flights moving tens of thousands of migrants away from the border.

CatholicVote has been calling attention to the moral catastrophe surrounding our southern border for years. Our Faith teaches that every human person is made in the image of God. Yet Catholics in good conscience are free to disagree on how to best uphold the dignity of migrants while pursuing different paths for reform.

Nevertheless, anyone today who dares to question the reckless open border policies of this administration, and the failure to enforce our laws in the face of a growing humanitarian crisis, is accused of racism, bigotry, and hate.

Immigrants seeking asylum or a better life in America deserve a process that is orderly and predictable. America needs immigrants. But we must welcome them in a way that doesn’t reward lawlessness and exploitation.

Today our laws are ignored, while many clamor for “comprehensive reform.” But the hard truth remains — no real immigration reform will ever happen until the border is secure.

That’s because the moral imperative to welcome the stranger always entails balancing many different goods.

Without taking attention away from the dignity of migrants, it’s fair to say that the least among us suffer the worst on both sides of the border. Our reckless border policies have been exploited by dangerous gangs and cartels on one side, and large corporations that benefit from cheap labor on the other. In addition, a booming transnational drug trade is now killing well over 100,000 Americans a year, and tragic stories mount here on our side.

…or remember in late June when human traffickers abandoned approximately 100 illegal migrants in a windowless trailer in San Antonio. Temperatures inside the metal trailer reached above 170 degrees Fahrenheit. The migrants, left for dead, suffered for hours. When first responders finally arrived on the scene, 51 of the migrants – including a five-year-old boy — were dead or beyond saving.

Yet the Biden administration has done nothing but defend the ever-worsening status quo.

What DeSantis did served as a wake-up call.

The path we are on is unsustainable.