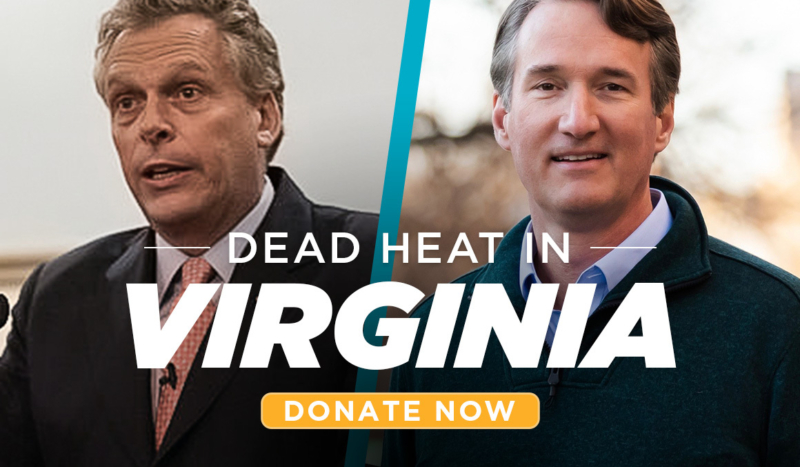 A new poll has the two candidates in a dead heat at 46%.

This is huge news! Don’t forget Joe Biden won Virginia by over 10% last year, winning by almost 500,000 votes.  For nearly a decade, Democrats have won every single statewide office.

But that could change this year, now that pro-life Republican Glenn Youngkin and Democrat Terry McAuliffe are tied with just two weeks to go!

McAuliffe thought this whole race was in the bag. According to insiders, he’s now sounding the alarm that his campaign is in trouble.  He didn’t expect it to be this close.

And national Democrats are freaking out.

They know a loss in blue Virginia would stop the Biden agenda cold.

Big-name Democrats are rushing to Virginia to rescue McAuliffe.

First Lady Jill Biden traveled to Virginia to campaign. Then last weekend Vice President Kamala Harris recorded a video message played to hundreds of black churches in Virginia — and she’ll also make her own campaign stops to get out the vote.

That’s not all. They’re also bringing in their “A list.” Former President Barack Obama will rally college students at Virginia Commonwealth University this Saturday.

They know this race is up for grabs.

Pro-life Catholics need to rally and turn out in record numbers.  We’re doing everything we can to make that happen.

Yesterday we reached a record number of voters with personal phone calls and text messages. This morning we recorded a series of new video ads, with parents — and even a Democrat voter, calling on voters to reject the McAuliffe extremism and elect Republican Glenn Youngkin.

Our grassroots volunteers are totally motivated.

They don’t want a pro-abortion “Catholic” as governor. We have enough of those already!

Let’s make some noise in Virginia!