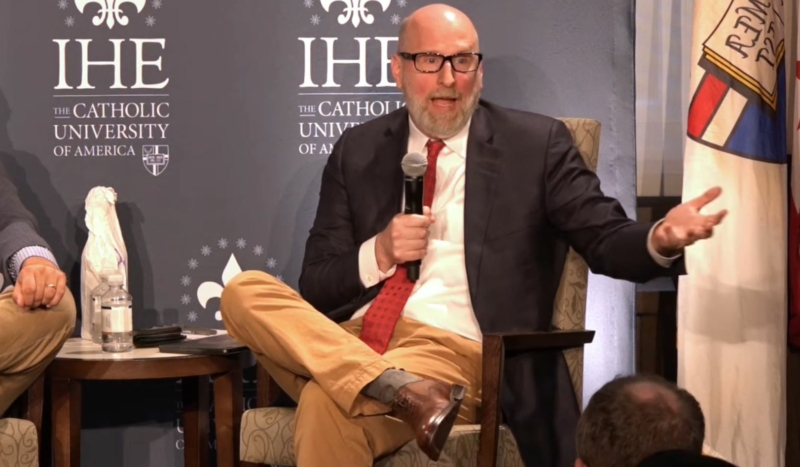 If you read National Review or First Things, or if you spend much time on Twitter, you’re probably aware of the long-running discussion about the future of conservatism between Sohrab Ahmari, an author and editor at the New York Post, and David French, an attorney and columnist at National Review.

On Thursday night, that discussion culminated with a fiery debate between the two intellectuals at Catholic University in Washington, D.C., moderated by Ross Douthat, a conservative columnist at the New York Times.

You can watch the debate here.

Ahmari launched the in-person debate the same way he started the online discussion: by attacking “David Frenchism” as “a program for negotiating Christian retreat from the public square into a safe private sphere.” As an alternative, Ahmari offered a broad ideological countervision in which — rather than managing our nation’s decline — conservatives instead use the political power of the state to reorient society toward the common good.

French, on the other hand, rejected Ahmari’s definition of “David Frenchism” emphatically by highlighting his impressive curriculum vitae and pointing to his passionate defense of the First Amendment over his career as an attorney. Fair enough.

But while French quibbled with Ahmari on several specific issues, including the epidemic of Drag Queen Story Hours popping up at public libraries across the country, which French poo-pooed as an insignificant threat even to the children that attend, he never quite addressed Ahmari’s premise that there is sometimes a role for the state to play in promoting moral ends.

In fact, in one instance, he unknowingly agreed: “I don’t think that pornography, as commonly exists, is a protected category of speech under the First Amendment.”

To which the moderator, Ross Douthat, excitedly exclaimed, “That’s Ahmari-ism!”

It certainly would seem to line up with Ahmari’s position. While French argued there is a lack of “political appetite” to regulate pornography and that the better strategy would be to launch a cultural religious revival to get men to voluntarily reject it, he admitted that he would support laws regulating pornography — and seemingly not just for children, but for adults as well.

This goes well beyond the current Supreme Court precedent set by Reno v. ACLU, which recognized a government interest in protecting children from pornography but largely affirmed an adult’s First Amendment “right” to pornography access.

French should be applauded for this. This is a rejection of Ahmari’s caricature of Frenchism! It’s an embrace of Ahmari-ism! We have achieved consensus! Hallelujah!

But French still disagrees. “That’s originalism,” he retorted in response to Douthat, perhaps inadvertently admitting the similarities between Ahmari’s worldview and the view of the Founders while still stubbornly rejecting the possibility of common ground with his opponent.

Another issue underlying the debate between Ahmari and French has been the rising power of tech companies and their Orwellian effort to censor conservative points of view on social media platforms.

In June, Senator Josh Hawley (R-Mo.) introduced the Ending Support for Internet Censorship Act, a bill that sought to discourage Big Tech censorship of conservatives by amending Section 230 of the Communications Decency Act.

At the time, French lambasted the legislation, calling it “unwise” and “unconstitutional,” and essentially arguing that because Facebook is a private company, they can do whatever they want, including meddling in our elections by one-sidedly censoring political content. Free speech rights are only relevant on public property, so this argument holds. And to be fair to French, this is a common view held by policy wonks, think tankers, and even a number of political leaders on the Right.

But as the Internet has evolved from a niche medium for communication to a total societal ubiquity, the true public square has been marginalized in favor of privately-owned facsimiles of the public square.

Public sidewalks and parking lots have been largely replaced by group chats and “timelines.” The legal ideas about private property and free speech rights informing much of French’s analysis simply don’t make sense anymore — not when private companies run by progressives now monopolize our discourse and have the power to decide whether an idea lives or dies.

It would seem that perhaps the “Frenchists” are the ones confused about their principles, even more so than the Ahmari-ists, who are admittedly still seeking out a precise ideological footing.

Ahmari says we should sometimes wield state power to promote the common good. French “sometimes” agrees but is Mad Online at Ahmari for saying so.

I don’t know. Maybe one needs a law degree to make sense of it.