CV Team on The Ground in Virginia 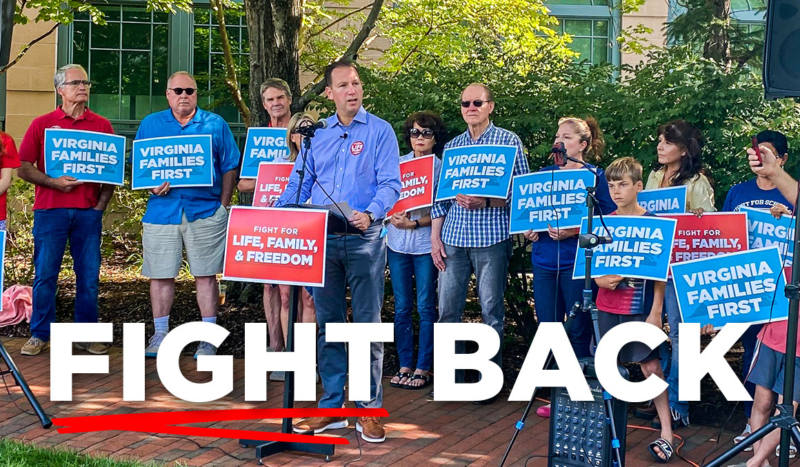 The Virginia election is just four weeks from today. The latest polls show a virtual tie, with Republican enthusiasm higher than Democrats’. Experts predict that less than 50% of eligible voters will participate!

The final result will come down to turnout.

That’s why your CV team is on the ground and organized a rally for parents and families in northern Virginia last Saturday. Former VA Attorney General and Trump official Ken Cuccinelli spoke boldly. “It is not our job to win, it is our job to fight,” he said. A courageous African American father spoke about holding local school officials accountable.

I asked the crowd to take St. John Paul II’s exhortation to heart: “The right to life must be defended with maximum determination.”

Help us keep the momentum going.

Help us win for families in Virginia!

Our rally was covered by FOX News several times over the weekend and received widespread coverage across many other news sites.

IMPORTANT: We refuse to be bystanders when it comes to our children’s education. We cannot allow neo-Marxists to teach our kids to hate America and each other.

Last week radical pro-abortion candidate Terry McAuliffe, who claims to be a faithful Catholic, said flat-out: “I don’t think parents should be telling schools what they should teach.”

The remark was revealing. Just yesterday, Biden’s Department of Justice ordered the FBI to begin investigating parents who object to the growing extremism in our public schools. This pattern is getting more and more dangerous: attack the institution of marriage, deny biology, deny parents’ authority over their kids, and threaten those who are pushing back against all this insanity.

But don’t forget — Terry McAuliffe has also bragged about building a “brick wall” for so-called reproductive rights. He’s warned that if the Supreme Court overturns Roe v. Wade, he will make the state an abortion haven.

And he’s promised to slam the door on Catholic adoption and foster care children.

We’ve got four weeks to make contact with every church-attending Catholic in Virginia.

Ken Cuccinelli is right: our job is to fight. Fight for the unborn, for parental rights, and for the freedom to live our faith.

Virginia is a winnable race. The polls have been close all year.

This race is considered a bellwether referendum on a president’s first year in office.

That’s why we’re doing everything we can to help.

Help us now, if you can.