Could Catholic Schools Save America? 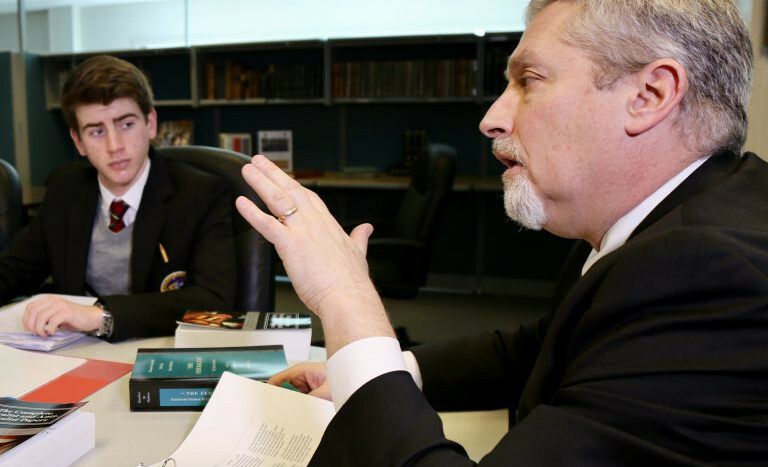 EDITOR’s NOTE: Dr. Richard Brake is the headmaster of St. Michael High School in Petoskey, MI. He recently delivered a very compelling speech outlining his vision for the Catholic education the school provides, and we thought it would be of interest to our readers here. Please find an edited version of his remarks below.

How does one articulate in a few minutes what’s at stake when one discusses “Catholic Education?” You might as well be talking about the Nature of Eternity. And indeed, that’s what’s at stake.

I don’t know about you, but I am 56 years old, and never in my lifetime have I felt more worried about the state of our culture, country, and Church.

There are powerful forces arrayed in the realm of politics, health care, social media, entertainment, and education that don’t want the Church and the founding principles of our country to survive, and they’re using this device (cell phone) to accomplish their dastardly deeds.

And who do they have primarily in their sights? I’ll tell you who: our kids.

So, that’s the problem. It’s a big one. It’s a fight. And do you know what’s particularly frustrating to someone like me? It’s that there are still a lot of folks out there who don’t realize they’re in a fight, even though the opposition keeps landing haymakers to their jaws, or the jaws of their kids.

But don’t despair. In many ways, it’s just back to the future, because I’m convinced that this was exactly the kind of world that existed when our Savior Jesus Christ came onto the stage.

And look how he got started: In a small town far away from the seat of power – a place maligned even by his own people as being backwater – with just twelve followers, one of whom betrayed him, while the others fled when the chips were down.

But let’s remember what they called him: Rabbi – in other words, Teacher.

Jesus accomplished his mission primarily by teaching, through great stories, and in the homes and synagogues of the domestic Church.

That’s the solution, folks. And that’s what we do every day at St. Michael High School.

I’m convinced that Catholic Education is the only vehicle capable of turning this situation around – and especially to fix the biggest problem facing the Catholic Church: the hemorrhaging of Church attendance, and our dire priest and religious shortage. If we don’t do something soon, folks, there’s not going to be anybody left in these pews, and at the altar celebrating Mass.

In the 19th Century, Catholic schools were founded because of vicious Anti-Catholicism; today, they need to be re-founded to provide any kid, Catholic or otherwise, a quality education that respects the traditional morals and values of everyday citizens.

So the bottom line up front is that Catholic schools like St. Michael High School need more students, more revenue, and better facilities to perform their stellar classical curricula and faith formation (and, in our case, our state championship-caliber athletics and inspiring fine arts).

There are little miracles happening every day at our school, and the only tragedy is that there aren’t more kids taking advantage of this tremendous product – the best-kept secret in Northern Michigan that doesn’t want to be a secret anymore.

Last fall in Virginia, a particular faction let slip out something that they’ve believed for over 50 years but have kept secret until now: They don’t believe parents should be involved in their children’s education. And you saw what happened! Finally, some families woke up and started to reclaim their schools. Good for them.

And for us people of faith, we realize the stakes are even higher, because we’re not only concerned with this life, but what happens in the next.

It’s for this reason that I’m here to implore you, to beg you, on my knees, if necessary, to help Catholic schools like St. Michael not only to survive, but thrive. Because by helping us flourish, you’re doing the only tangible and practical thing that at this moment can save the Church and the souls of our kids.

Frankly all communities desperately need a quality Catholic high school in their midst. Thankfully, our community has one in St. Michael – but it needs and deserves your help.

And it will require sacrifice at first, especially for parents who’ll have to have tough talks with their kids as to where they should go to high school; and for older folks, who’ll need to part with more of their hard-earned money to help provide scholarships for many of those kids who need financial aid.

Lincoln had a great quote about classical education. When a farmer came up and asked him why he was reading all of those old books – Shakespeare, Euclid, Aquinas, Locke, among others – when none of them would teach him how to farm, he replied: “I learned to make a living from my daddy – I read those books to learn how to live after I’ve learned to make a living.”

In a nutshell, that’s what we do at St. Michael – with this important caveat – we also teach kids how to know, love and serve God so they can get to Heaven and be with Him in Paradise.

I don’t know of a more important mission, do you?

May God bless you. St. Michael, pray for us!