Conserving Liberalism: How Charlie Kirk Can Save the West 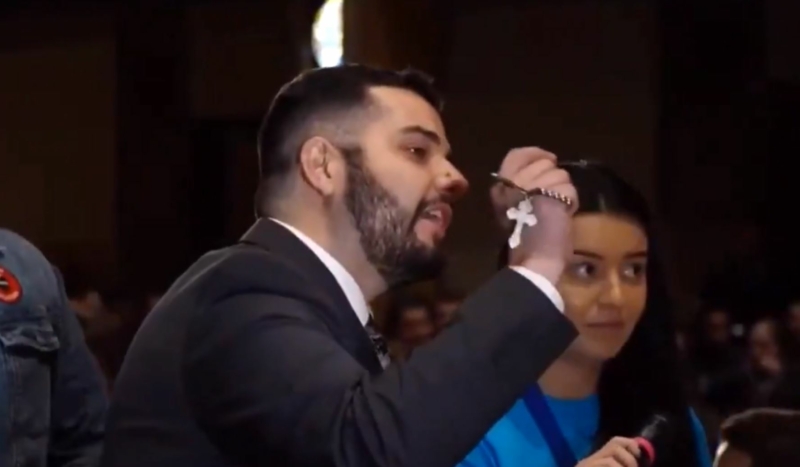 A growing subgroup on the political right has been infiltrating Q&A livestreams with conservative youth organization Turning Point USA. Their purpose is to pose embarrassing questions designed to expose mainstream conservatism’s lack of a backbone in the fight against cultural Leftism.

Judging from the social media comments, a lot of people think there’s a civil war brewing on the right. A war between a reasonably liberal, mainstream right and a more extremely conservative alt-right.

But the problem goes deeper than that.

What we’re really facing is a rise of illiberalism on both ends of the right, and on the Left as well.

And if conservative leaders like Charlie Kirk don’t face it head-on, the whole nation is in danger of losing its grip on the one thing we all must agree to conserve: The true Liberalism of our Anglo-American heritage.

As I’m sure the questioner hoped, Kirk and Smith fumbled their answers.

“…Like, I don’t care what two consenting adults do,” said Kirk. “And your hyperfocus on it is kinda … weird.”

Smith, a homosexual, went further, taunting the questioner with variations on the anti-religious cliches of the LGBT movement. We’re here, get used to it. Smith even suggested the questioner was “obsessed” with homosexual sex only because he’s a closeted gay himself.

These stuttering non-answers and jeers played right into the hands of the infiltrators, who can now argue that mainstream conservatism is not only weak in its defenses against the cultural Left, but has become the Left’s enforcer and gatekeeper, dutifully excluding orthodox Christian teachings on sexual morality.

In other words, they successfully pitted Christianity against Charlie Kirk’s brand of conservatism. In the following days, several Christian TPUSA members even quit the organization in protest.

Backed into a corner, defenders of Turning Point now find themselves seeming to defend the worst possible implications of what the flustered Charlie Kirk and angered Rob Smith said in the heat of the moment:

That the mainstream right is illiberal. That they are working to build an American future in which orthodox Christians are mocked and marginalized. In which the ever-changing mores of the illiberal Left, handed down by the courts and cultural elites who gave us gay marriage and drag queen story hour, will be normative.

Meanwhile illiberal rightists are now using the exchange to assert their own, alternative brand of politics; a conservatism which, they argue, actually conserves the thick moral roots of the Western world’s Christian heritage–to the exclusion of supposedly noxious dissenters like homosexuals, atheists, Jews, and Muslims.

Both Right? No, Both Wrong.

Here’s the problem with the infiltrators: Remember how the questioner clasped a rosary in his fist? Half of the illiberal right will one day have to add Roman Catholics to their list of “noxious dissenters,” if they ever hope to establish their ethnically and culturally pure American Protestant regime.

Alternatively, the other half of the illiberal right will eventually have to quash Protestant dissent against their Roman Catholic regime.

And if illiberalism gains a foothold in mainstream conservatism, we won’t fair any better. Pro-gay speakers like Rob Smith are welcome to speak at TPUSA events. Does that mean orthodox Christians, who believe sex is meant for marriage between a man and a woman, will be excluded as speakers?

You see, illiberalism, wherever we find it, only operates on behalf of one faction. It works on the assumption that we’re always embroiled in a total war–a zero-sum competition between tribes which only one can ultimately win.

This leaves all of us in a posture of insecurity, fragility, and defensiveness of our respective tribes, blindly striking out at all rivals, current or potential.

Nothing could be further from the true Anglo-American heritage that American Conservatism has always represented. As I’ve written elsewhere:

It’s only by twisting Western political philosophy that anyone can make it illiberal or hateful. It’s the system of ideas that gave us the Magna Carta, the United States Constitution, and later the abolition of slavery in both Britain and the U.S.

This same tradition of thought gave us the U.N. Charter of Human Rights, and the assertions of human dignity against the illiberal and exclusionary hate of the Nazi regime at Nuremberg.

All of these documents stem from the same liberating and humane political philosophy that has always stood against any faction that threatened to pit man against man.

And in that political philosophy we also hear echoes of the blessings of true and tolerant religion. As Thomas Jefferson famously put it, “all men are created equal,” and “they are endowed, by their Creator, with certain unalienable Rights….”

The only way to avoid an illiberal, ungenerous, and ultimately violent future is to assert a conservatism that conserves that liberalism.

For that purpose, here’s how I wish Charlie Kirk had responded to his questioner this week, and how I hope he’ll respond in the future:

As a Christian I understand that the human person is made in the image and likeness of God, and that is the source of our inviolable dignity, beauty, and worth.

Christian sexual ethics is intricately tied to that understanding of human dignity.

Sex, or as we understand it, the marital act, exists to create life, and to unite a husband and wife for the care of the life they cocreated with God.

My friend Rob Smith here rejects that Christian teaching, and lives an actively homosexual lifestyle. But he knows where I stand, and he knows that many members of Turning Point USA stand with me.

If Rob insisted his LGBT ideology were mandatory, and that dissenters like you and me should be excluded from the conservative movement, I would reject his illiberal tribalism.

But what Rob and I do agree on, and what every member of Turning Point USA agrees on, is this: As Americans, we are the heirs of a liberal political tradition, inspired by the Christian Revelation that we are made in the image and likeness of God, and endowed by Him with certain unalienable rights.

It also means that no faction or tribe, whether yours, mine, or Rob’s, can be allowed to dominate and abuse the others to the point of violating their dignity as creatures made in the image and likeness of God.

You cited E. Michael Jones before you asked your question. Jones, while he agrees with Christian sexual ethics, would not agree with that Anglo-American political philosophy.

In fact, when he defends Christian teachings on sexual morality, in the same breath he asserts an illiberal political belief: That sexual deviance and other social ills are a method of political control deployed by Jews, and that therefore Jews are a tribe that must be politically suppressed.

I reject that view for the same reason I would reject Rob imposing LGBT ideology on everyone; because it singles out a segment of society for marginalization and exclusion.

Thank you. That was a good question, and it gets to the heart of the conservative project today.

….
EDITORIAL NOTE: Due to an editorial mistake, the conclusion of the above essay was missing from the initial post. It has been corrected.