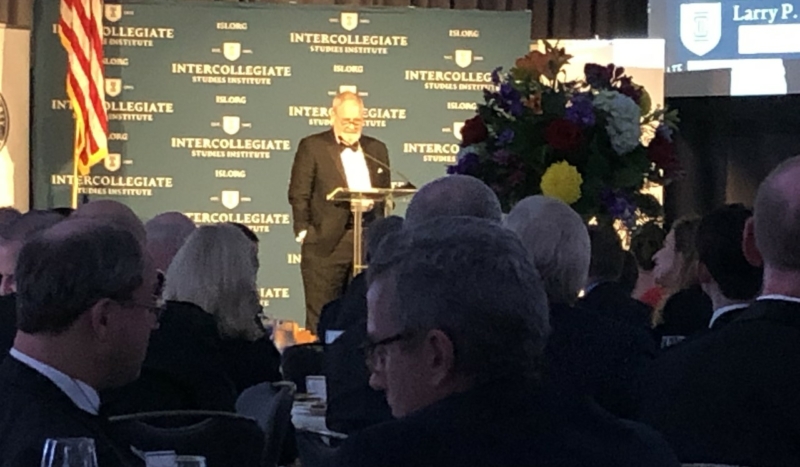 CV NEWS FEED // Hundreds of conservative students and academics expressed faith in the future role of Western civilization within higher education at a gala in Washington, D.C. on Thursday.

Larry P. Arnn, the president of conservative Hillsdale College in Michigan, warned the assembly in an evening keynote that woke progressives are now using the force of law to exclude any notion of “something that inspires us to be better” from higher education.

“We must live in a way that we emulate the divine,” Arnn told the assembly, drawing this lesson from the Lives of Plutarch.

According to Arnn, this effort to keep faith in the possibility of transcending human limitations has faltered due to recent triumphs of leftist policies, including the National Archives placing “trigger warnings” on the Declaration of Independence for using the phrase “merciless Indian savages” and on the Constitution for its treatment of slavery.

“We’ve taken the effort out of life,” Arnn said, noting how this restriction of traditional sources impedes the love of wisdom and goodness from growing in students as the ancient Greek philosophers had hoped.

Arnn offered his own theory of why today’s “tyrants and nihilists” find support for cancelling these documents, namely that they set higher standards of behavior for Americans.

“It’s that discipline that we hate and it’s devastating,” he said.

Hosted by the Intercollegiate Studies Institute, a pro-liberty non-profit network of campus conservatives, the 15th annual Gala for Western Civilization also included the announcement of a $75 million capital campaign to fight woke ideology on college campuses.

At the evening banquet, ISI also honored political science professor Daniel J. Mahoney with its George Carey faculty award. Mahoney is professor emeritus at Assumption University, a Catholic school, and will be a visiting scholar at Arizona State University in spring 2022.

In a recorded panel discussion earlier in the day on how conservatives should view the American founding, moderated by Modern Age editor Dan McCarthy, the theme of maintaining faith in Western civilization expanded to include a discussion of the role Catholicism plays today in providing a bulwark against anti-Western political pressures.

Stephanie Slade, a Catholic who serves as managing editor at the libertarian Reason and contributes to the Jesuit-run America, offered a “both/and” answer to the question of whether America was founded religious or secular and for virtue or for liberty.

“The answer is all of the above,” Slade said, adopting what she called a “fusionist” perspective.

Asked by McCarthy whether America needed to recover the religious impulse of its founding, Slade noted one strong similarity between the founding fathers and Catholics when it comes to faith: “We have to live it.”

Despite the apparent triumph of woke politics in today’s colleges, and disagreements throughout the political spectrum on the nature of the American founding, the panelists agreed on the enduring value of the American enterprise and the need to fight for it.