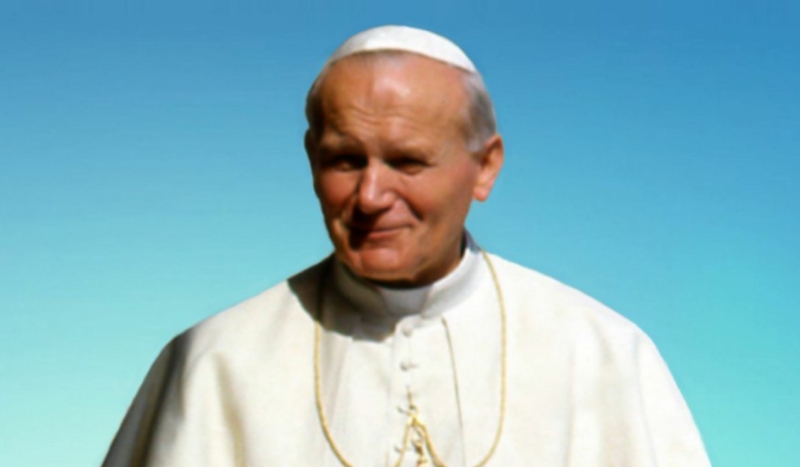 Catholics are struggling with a lot in the news today, from controversial Amazon statues to the Church’s financial crisis. But they recently found a cause for celebration: St. Pope John Paul II.

October 22 marked the feast day of St. Pope John Paul II. It’s also the date that he became the 264th pope. Born Karol Wojtyla, in Wadowice, Poland, he served as pope from 1978 until his death in 2005. He was canonized a saint just nine years later.

He won the world’s admiration for guiding the faithful through tumultuous world events, canonizing a number of saints, forgiving the man who shot him, and traveling around the world, including for World Youth Day, which he established.

But he’s also known for personally influencing Catholics. Many of them took to Twitter on his feast day to thank him and ask for his intercession.

“The greatest gift St. John Paul II taught me is how to love the Church, Jesus and Mary more than one could have expected!” one Twitter user exclaimed.

Franciscan Friar Matt Foley shared a photo of himself as a youth meeting the pope.

“I met him with my family on February 14th, 1996 when I was a junior in high school,” the friar began. “My family was in Rome and after he gave his general audience, we were escorted to the front of Paul VI Audience Hall, where he greeted us individually.”

He remembered, “I was struck by his piecing blue eyes, when it was my turn to meet him, I was speechless. My family jokes that it was the only time they’ve seen me speechless.”

But, “Eventually, I stammered the most coherent thing I could muster … ‘You’re the pope’ I blurted.”

After the pope smiled, Foley then “asked him to pray for my family and friends.” In response, the pontiff “told me to love the Blessed Mother and be faithful to the Church.”

“I never would have imagined that I’d enter religious life and the priesthood,” he admitted. “But Pope John Paul II became a hero and person I deeply admired and even more so when I started discerning a vocation.”

When Foley entered the friars in August 2001, he even thought about taking “John Paul” as his new religious name.

“It was during my first year of theology that he died,” the friar recalled. “I remembered sobbing the next morning when I went to Mass and heard the Eucharistic prayer prayed without his name.”

He concluded, “He taught me by word and example how to be a disciple of Jesus Christ and a friar and priest.”

He wasn’t the only one left inspired by John Paul II.

Fr. Matthew Schnieder tweeted that, in 2001, he also “felt the call to the priesthood” while “listening to a recording of this man’s voice, ‘Be not afraid to be the saints of the new millennium.’”

Likewise, Fr. Peter Calabrese revealed that the saint’s “papacy was certainly part of God’s call for me to live my Catholic Faith seriously and to consider a priestly vocation.”

In Boston, Bishop Robert Reed typed, “This saintly man, priest and Bishop of Rome inspired my passage into Catholic adulthood.”

Casey wrote, “My husband and I met him in 1994-private audience where he laid on hands. Changed my life!”

Catholic speaker Mark Hart tweeted a photo of himself and his wife kneeling before the saint.

“When I was 16 I began reading his words & my life began to change. No other writer or thinker has shaped my faith like he has,” Hart wrote. “Years later, kneeling beside my best friend while meeting my hero. Epic moment.”

Others expressed thanks to the pontiff for guiding their spiritual lives.

Chelsi wrote, “Today is the feast of one of my dearest heavenly friends. He blessed my baptism and his writing has guided much of my professional life.

That’s because his work – his influence – on earth lives on even after death.