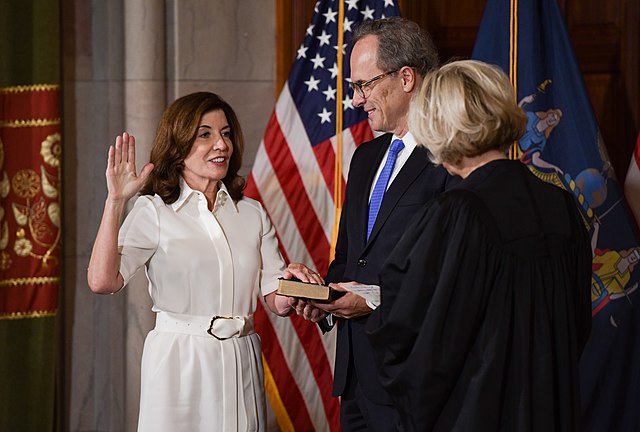 In their lawsuit filed Monday in federal court, Forbes reports that the plaintiffs—nine doctors, five nurses, a nuclear medicine technologist, a physician liaison, and a rehabilitation therapist—want a judge to rule the state’s mandate “unconstitutional, unlawful, and unenforceable.”

The doctors, nurses, and other workers complain that the mandate reduces them to a “caste of untouchables” unless they “consent to being injected, even ‘continuously,’ with vaccines that violate their religious beliefs.”

Former New York Gov. Andrew Cuomo, who remains under scrutiny for the deadly spread of Covid-19 in nursing homes due to his summer 2020 health policies, announced last month that all of the state’s health care workers would need to be vaccinate. Shortly afterward, Cuomo resigned in disgrace amidst mounting complaints of sexual harassment.

Cuomo’s replacement, Gov. Kathy Hochul, has maintained the vaccine mandate policy despite distancing herself from his nursing home policy and from his ongoing refusal to admit any wrongdoing in the sexual harassment charges that a New York attorney general’s report deemed credible.

In the lawsuit, the Catholic and Baptist medical professionals say their religious beliefs prevent them from receiving any of the available vaccines because the shots were “developed or produced with fetal cells line derived from procured abortions.”

The Vatican and U.S. bishops allow Catholics to receive the vaccines, and even encourage them to do so.

Nevertheless, they also say there is no moral obligation for Catholics to receive the shots and have clarified that no Catholic may be forced to do so.

According to Forbes, the lawsuit is only one of many legal challenges springing up all across the country in response to new government vaccine mandates since President Joe Biden’s announcement last week of new punitive measures against those who refuse to be vaccinated.

Those who refuse to follow the Biden-inspired vaccine mandates risk losing their jobs and livelihoods.

Kathy Hochul is ceremonially sworn in as 57th Governor of the State of New York on Aug. 24, 2021, following the resignation of controversial Gov. Andrew Cuomo (NY Senate Photo/Creative Commons)