In the wake of San Francisco Archbishop Cordileone’s assertion that Catholic schools should teach Catholic doctrine — crazy, I know, right? — the local media in the ultra-liberal Bay Area is eager to point up all the ways in which the Catholic Church doesn’t live up to its own teachings.

That includes a breaking story about the way that the modernist and decidedly un-traditional-looking Cathedral of Saint Mary (really, it looks more like a Storm Trooper’s helmet than a house of God), uses spigots to periodically douse any homeless folks sleeping in its doorways. Click here for Deacon Greg Kandra’s continuously updated coverage of this over at Patheos Catholic.

Now, the Church, including the one in San Francisco, is a centuries-long leader in caring for those in need, but this may be a bit much, especially in the city named for Saint Francis of Assisi, a k a Il Poverello (“The Little Poor Man” in Italian), known for his deep concern and love for the poor, sick and marginalized.

Apparently, Archbishop Cordileone — who has done much to help the poor and homeless — wasn’t in on this particular decision, but it’ll be up to him to see it put to rights. And it doesn’t hurt every now and then for Catholics to be reminded to walk the talk, something St. Francis did exceedingly well.

While this all matriculates through the press and the Archdiocese, here’s a song whose video reminds us of the human faces of poverty and homelessness:

UPDATE: Scant minutes after I posted this, the Archdiocese issued a statement: 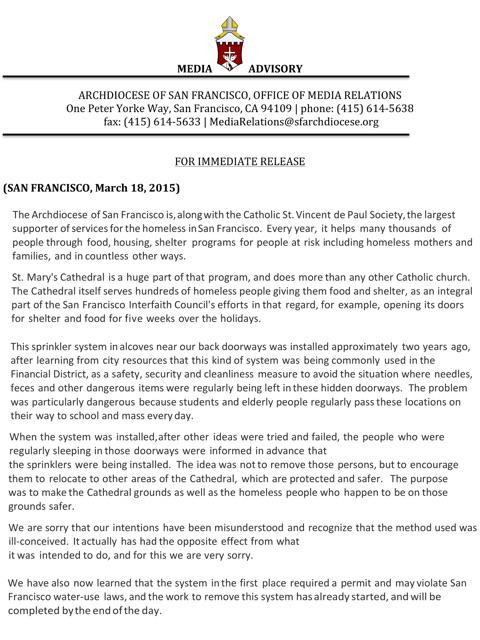