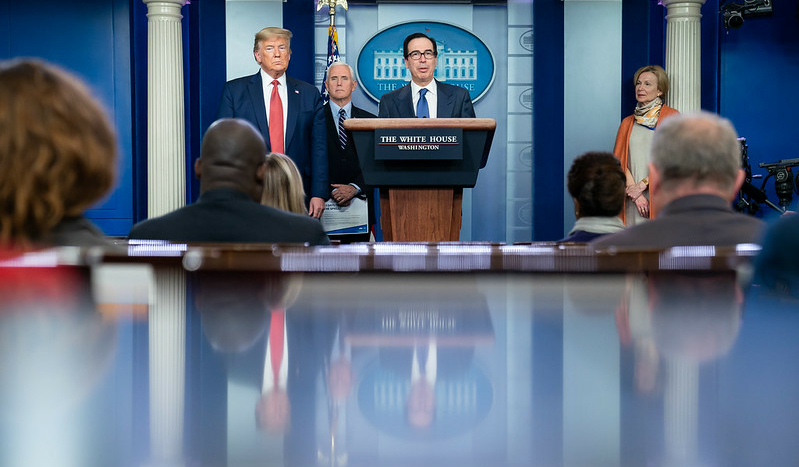 And you may not have realized it.

As you know, the government-imposed quarantines and shelter-in-place orders have shuttered nearly every Catholic parish in America. That means no masses. No sacraments. And it also means no collections. For this reason, many Catholic parishes and schools are nearly out of money — with many now considering layoffs, or even potential closure.

And this is only the beginning. Some states are considering banning religious services for several more weeks, or even months…

Without help, it is very likely that many parishes WILL NOT survive.

Thankfully the new CARES Act signed by President Trump provides emergency relief not just for small businesses, but for nonprofits, too. Under new approved rules, parishes and schools are now eligible to apply for a forgivable loan offered through the “Paycheck Protection Program” (PPP) as long as each parish and school does not have more than 500 employees. This loan can cover 2.5 months of payroll and utility expenses as long as the nonprofit organization maintains its monthly payroll.

But here’s the critical part…

Republican leaders in Congress and the Senate worked with the Trump administration to make sure most Catholic schools and parishes would qualify with two specific clarifications:

1) Many parishes and schools feared they would be classified together with all parishes in their diocese as one large corporation, and therefore be ineligible for aid. Thankfully, Senators Josh Hawley, R-MO, and James Lankford, R-OK, worked with the Trump administration to clarify that faith-based organizations that affiliate with another organization (like a diocese) because of their “religious beliefs about church authority or internal constitution, or because the legal, financial, or other structural relationships between them reflect an expression of such beliefs,” can be treated as stand-alone organizations and qualify for the loan relief funds.

This ruling was clarified 4 days ago and is a huge win for Catholic parishes and schools!

But there’s more. And this may be the most important clarification:

2) Qualifying Catholic nonprofits, including parishes and schools, will not be discriminated against based on our religious beliefs. This means these programs are neutral “generally applicable loan programs” that cannot force Catholic organizations to surrender their religious identity or beliefs in order to qualify.  “No otherwise eligible organization will be disqualified from receiving a loan because of the religious nature, religious identity, or religious speech of the organization,” said the Small Business Administration in a statement.

This kind of thing doesn’t just happen by accident.

Can you imagine if Hillary Clinton was President!

We don’t have to imagine actually…

After all, Hillary Clinton said in 2015, that “deep-seated cultural codes, religious beliefs and structural biases have to be changed.”

And what about Joe Biden? Who can forget the Obama-Biden Administration’s shameful pursuit of the Little Sisters of the Poor? Or their 11th hour rule that disqualified Catholic adoption and foster care programs from receiving federal grants because of our time-honored belief in marriage… or their notorious rule of having a federal bureaucracy decide if a Catholic university was “Catholic” enough to claim religious liberty.

In fact, left-wing atheist groups are already suing to try and stop the new relief funds from reaching religious organizations. They want this pandemic to bring the church to her knees.

Had this crisis occurred with a Democratic President in office, many of our Catholic parishes and schools would now face a terrible choice: surrender their beliefs to the government — or shut their doors.

I have no doubt the Left would have used this pandemic to shut down Catholic parishes and schools and to permanently close Catholic charities. The LGBT lobby would have never allowed these funds to flow to religious groups without strict “anti-discrimination” rules. It could well have been the end of the Catholic Church in America as we know it.

This pandemic is truly a once-in-a-century type event. And without emergency economic intervention, the restrictions now imposed on the country have the potential to wipe out entire industries and segments of our society.

Don’t think for a moment that Catholic parishes and charities will be magically resistant.

These loans are truly a lifesaver.

Critics of the President often mock his defense of religious liberty. Yet his decision to make sure nonprofit religious organizations qualify for this critical relief may turn out to be the most significant policy for Catholics of his entire first term in office.

Every bishop and pastor knows how important these funds will be.

When they return to saying public masses, I hope they will thank the President.