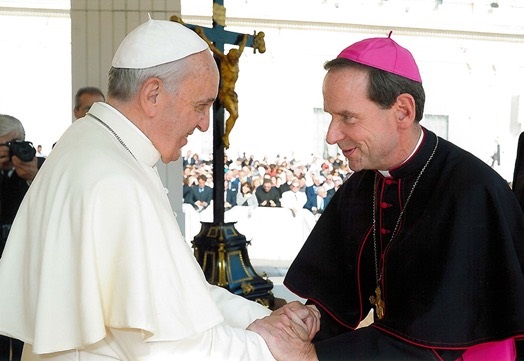 The document “A Catechesis on the Human Person and Gender Ideology,” dated Thursday but publicized Friday morning in a Tweet from the diocese, includes a cover letter from Bishop Michael Burbidge explaining his desire to clarify Catholic teaching and offer pastoral guidance. Its publication closely follows the controversial 7-2 vote on Wednesday in Loudoun County, one of 21 counties within the territory of the Northern Virginia diocese.

“I pray that all who read this catechetical resource may be enlightened by the foundational truths it conveys in all charity and drawn closer to God, who made us and desires that we experience his joy through the vocation he has given us,” Bishop Burbidge wrote.

The bishop also wrote that the document came about as the result of extensive consultation of experts in theology, bioethics, psychology, and civil and canon law as well as local clergy.

In the introductory paragraph of this document released under the bishop’s name, gender ideology is defined as “the claim that a person’s biological sex and personal identity have no necessary connection and could in fact contradict each other.”

In the eyes of the Catholic Church, the document states that someone claiming to be “transgender” in this way experiences a psychological state of “gender dysphoria,” contradicting their own biological reality.

On pages 5-6, a key paragraph states:

“The Church teaches that a person is created male or female. No one ‘is’ transgender. A person who identifies as transgender may experience troubling feelings, confusion, or a mistaken belief that he or she is or can ‘become’ someone different. The Church does not teach that people who experience gender dysphoria or confusion are immoral or bad. At the same time, a person who deliberately rejects his or her given identity or the sexed body and seeks harmful medical or surgical interventions is pursuing a path that is objectively wrong and harmful on many levels.”

In response to the diocese’s Tweet, Catholic writer and speaker Amy Welborn offered qualified praise of the document in a Tweet of her own, writing Friday morning: “A good start, but limited because of an incomplete presentation of the situation on the ground, which is not so much about ‘dysphoria’ but about the consequences of the ‘right’ to determine ‘gender’ without even consideration of physical attributes.”

Wednesday’s vote allows transgender students to play on sports teams, choose bathrooms, and select locker rooms based on their self-defined gender identity. It also requires teachers and other public school employees to address students by their preferred names and pronouns. At least one teacher has already resigned in response to the new policy and others, including mandatory critical race theory trainings.

Also Wednesday, a Texas commissioner ruled that transgender surgery on the genitals of a minor constitutes “child abuse” under state law. Gov. Greg Abbott has promised to follow up.