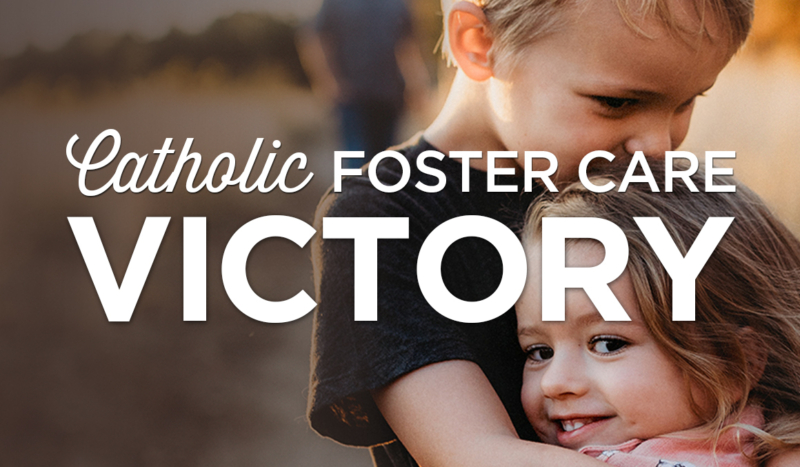 Unanimous. The Supreme Court ruled 9-0 in favor of Catholic Social Services of Philadelphia.

Not even liberal Justices Sotomayor, Kagan or Breyer dissented.

ABOUT THE CASE: The City of Philadelphia decided in March of 2018 that they would refuse to partner with Catholic Social Services in providing foster care services to children, unless the Catholic agency would place children in the homes of same-sex couples. Of course, this is impossible. Catholic teaching requires that we uphold the definition of marriage, but also affirm that children do best in homes with both a mother and a father.

The Supreme Court ruled that the City of Philadelphia violated the First Amendment:

“Government fails to act neutrally when it proceeds in a manner intolerant of religious beliefs or restricts practices because of their religious nature.”

Today’s ruling was a no-brainer. Long before the city became involved in adoption and foster care, Catholics there were serving the needy children of Philadelphia. In fact, for more than two centuries, Catholic agencies have successfully placed the most at-risk kids in loving, forever homes.

Today, the Supreme Court rightly affirmed that the Constitution guarantees faith-based agencies freedom from government harassment and discrimination because of their religious beliefs about marriage.

All Americans benefit from the Supreme Court’s decision to uphold our First Amendment freedoms, but most especially the vulnerable children of Philadelphia who directly benefit from the life-changing work of Catholic Social Services.

WHAT NOW: Winning this legal battle is huge. But it’s not enough. Court watchers correctly noted that the legal grounds for the decision were narrow. In an excellent concurring opinion, Justice Alito pointed out that the Court decision rests on “a superfluous (and likely to be short-lived) feature of the City’s standard annual contract.”

Both Alito, Gorsuch and Thomas argued the Court should have gone further by revisiting a previous Supreme Court decision that many believe has been an obstacle to solidifying the right to religious liberty.

We’ll have to wait for that.

And let’s not forget…

That’s why it’s critically important that our Church continue to courageously resist the cultural tidal wave now threatening us. We must proudly teach the truth about marriage, family, and human sexuality in our schools, parishes and ministries — no matter the cost.

LGBT radicals aren’t going away. They’ve got big money behind them.

And the Church is in their way.

But we’ve got prayer, faith, and the truth.