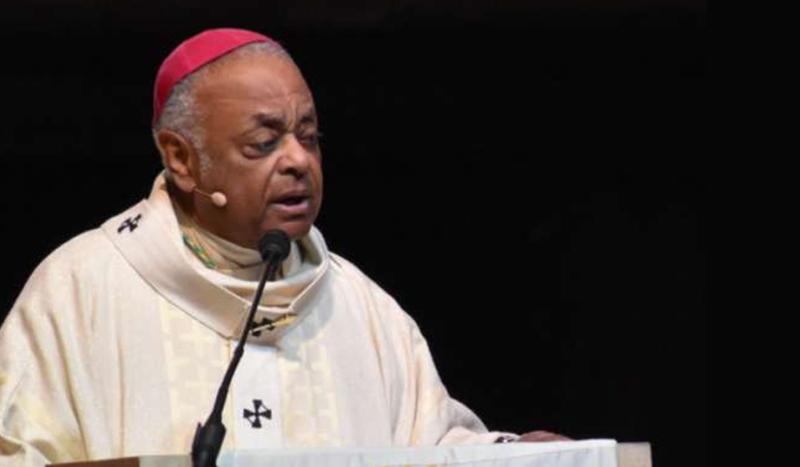 The Catholic News Agency is reporting that they have obtained a copy of an email between the Archdiocese of Washington D.C. and the White House that shows Archbishop Wilton Gregory knew well in advance that President Trump was going to visit the St. John Paul II Shrine.

According to CNA, in an email dated May 30, Archbishop Gregory’s office politely declined “the kind invitation to attend the event celebrating International Religious Freedom on Tuesday, June 2, 2020 at the Saint John Paul II Shrine.” Recall Archbishop Gregory previously claimed that he was only told of the event on June 1, when he released a statement calling Trump’s visit “reprehensible.”

If he had a problem with President Trump’s planned visit, why didn’t he say something to the White House? Or to the organizers? Or the shrine? Or to owners of the shrine — the Knights of Columbus?

It now appears that the Archbishop (or his staff?) may have misled the public about his knowledge of the event — and even held back on expressing any concern until just before the President’s visit when his statement might have maximum political impact. If so, he owes them both an apology.

But ask yourself: where is this coming from? Why the sudden and very public partisan attack from an archbishop?

HARD TRUTH: Left-wing agitators have gained a major foothold in the Church. From celebrity Jesuit priests, to keyboard warriors at certain news outlets, to even some chancery offices, these activists want to remake the Church and the world in their so-called “progressive” vision. And like most left-wing movements, that vision requires power — and lots of it.

Which is why the #1 goal for these activists is defeating President Trump in November.

Let’s not forget a majority of Catholics voted for Donald Trump in 2016. And the Catholic Left is terrified we might help give him another four years.

President Trump has broken the mold. He’s been one of the greatest champions of religious liberty ever to occupy the White House. He’s proudly pro-life, promised pro-life judges, and (unlike some of his Republican predecessors), followed through with hundreds of strong judicial appointments including two appointments to the Supreme Court. He supports Catholic schools, and made protecting them a priority with recent relief funding.

President Trump is no ordinary politician. He’s brash and feisty (yes, even rude at times) — but he refuses to back down. He’s an old-school patriot who believes America is a special place. That the military, and police, and the flag are worth honoring. And that despite our numerous faults — and there are many — we are not a land overwhelmed with racist and sexist hate.

And most importantly — if we have any hope of living up to our nation’s principles and ideals, we must fight for the foundational truths that made this grand experiment in liberty possible.

President Trump didn’t get elected to make friends. And by no means is he perfect. But from the first day he was elected, he was viewed as an existential threat to the political order of the past 50 years. And his political enemies, the media, and now unfortunately even some in our Church, have manufactured crisis after crisis in order to stop him.

So when we at CatholicVote announced late last year our plans to create the largest Catholic voter outreach campaign in American history, the Catholic Left went into full panic mode.

They know what’s at stake. Because there is one thing they know they can’t stop. Faithful Catholics like you willing to stand up for the truth.

Donald Trump is not our savior. He may not even win in November. But whatever happens, the challenge of this historic moment is not going away anytime soon.

We are here for the long haul. And I promise you we will not shrink from the fight.

And I promise, as Archbishop Gregory said when he was installed last year: “I will always tell you the truth.”

P.S. You know the drill. Our work only happens because of people like you. If you can help, we need you now more than ever.