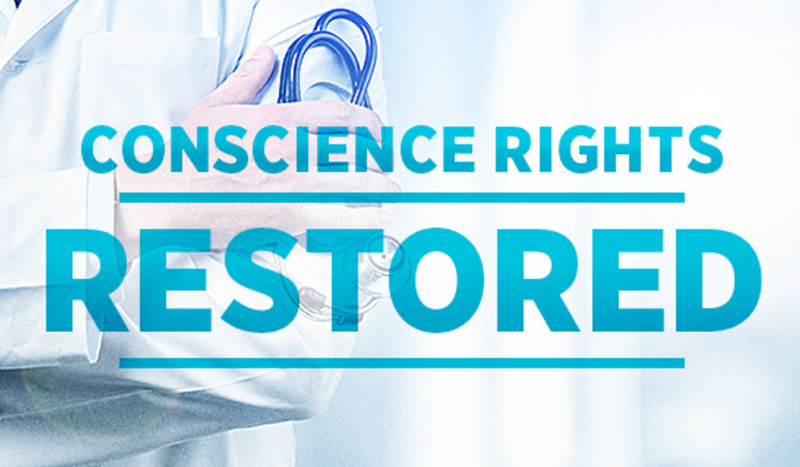 The Trump administration has done it again.

Another victory for religious liberty… and life!

Just yesterday I attended the National Day of Prayer at the White House where the President announced that they have finalized a rule to ensure conscience protections for health care professionals.

The new rule ensures that doctors, nurses, and other health care workers will not be forced to violate their conscience by participating in unethical procedures such as abortion, sterilizations, or assisted suicide.

IMPORTANT: Americans want affordable health care. But they also want ethical health care. They don’t want Catholic doctors, nurses and other health care workers driven from the industry because of their refusal to participate in so-called “care” which they consider immoral — and often unhealthy, too.

But this new rule also underlines a key point: What a difference the presidency makes.

Archbishop Joseph Naumann and Archbishop Joseph Kurtz yesterday applauded the new rule: “We strongly commend the Department of Health and Human Services for adopting important new regulations to ensure that existing laws protecting the rights of conscience in health care are known, followed and enforced. Though these laws were passed on a bipartisan basis and have been policy for years, the previous administration did not fully enforce them, and now they are increasingly being violated.”

Not only did the Trump administration reverse the harmful actions of the Obama administration, we are now seeing a restoration of conscience rights and religious liberty for doctors, nurses, and health care workers all over the country.

And it’s not just better policy on paper. The Trump administration is promising to vigorously enforce these conscience protections.

Hospitals that receive government funding will not be able to fire health care workers who exercise their conscience rights. “Laws prohibiting government funded discrimination against conscience and religious freedom will be enforced like every other civil rights law,” said Roger Severino, director of the Office of Civil Rights for the Department of Health and Human Services.

The Department of Health and Human Services will use robust enforcement tools to investigate complaints and conduct investigations. The agency is empowered to make enforcement referrals to the Justice Department.

And these new rules will apply to the following entities:

This is a bold and necessary step to restoring ethical health care across America. And we applaud these executive actions.

But it’s worth remembering that it can all be wiped away by a stroke of a pen — if the wrong person is elected president next year.

Yesterday was a perfect example of everything that’s at stake in 2020. Planned Parenthood immediately attacked these new conscience protections, which means the Democrats running for president and (seeking their endorsement) will almost certainly attempt to roll them back — if given the chance.

We’re making so much progress.

It would be tragic to reverse course.