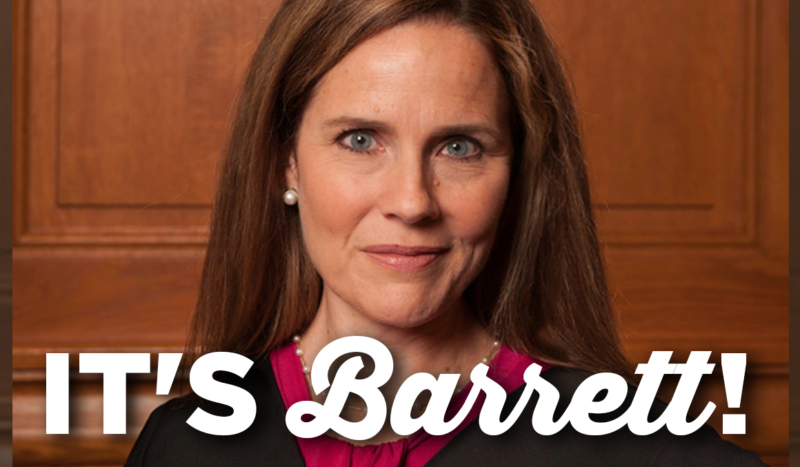 “A brilliant jurist… fair and impartial.”

And a faithful Catholic mother of seven children.

I am honored to be at the White House tonight where President Trump just announced his choice to fill the open vacancy on the Supreme Court. The excitement is palpable. Judge Barrett, with her husband and children, should make every Catholic proud! I sure am…

This is the woman we hoped the President would select.

Now it’s our job to help her get confirmed!

Notre Dame Law colleague Professor Carter Snead wrote in the Washington Post today that Barrett has an “incandescent mind that has won the admiration of colleagues across the ideological spectrum.” Snead cited respected liberal Harvard Law professor Noah Feldman, who wrote in 2018: “Any Senate Democrat who tries to go toe to toe with Barrett over her legal abilities is going to lose. Badly.”

Barrett is an originalist just like the late Justice Antonin Scalia, for whom she clerked 22 years ago. Clerks at the time say she was Scalia’s favorite. She believes in judicial restraint, and looks to the text and original intent of legislators — and the Constitution — when interpreting the law.

And she is a Catholic.

She believes in the inherent dignity of every human person. Which is why left-wing senators and activists are attacking her. Despite the fact that she pledged to act impartially and not to allow her faith to dictate any judicial decision — pro-abortion forces know what is at stake. And they intend to destroy her.

Who can forget Senator Dick Durbin, D-IL, interrogating her during her confirmation hearing in 2017: “Are you an orthodox Catholic?” But the most jaw-dropping moment at Barrett’s 2017 confirmation hearing was when Senator Dianne Feinstein, D-CA, stated: “In your case, professor, when you read your speeches, the conclusion one draws is that the dogma lives loudly within you. And that’s of concern.”

Last night a former staffer on Capitol Hill began tweeting about Barrett’s two adopted children from Haiti, suggesting that Judge Barrett and her husband could have been involved in a “sketchy” and “transracial adoption” fraught with trauma and potential harm.

These attacks are baseless and totally disgusting.

But it’s likely to only get worse.

Your CV Team is already working on a new ad campaign set to launch next week.

PRIORITY: Our #1 request tonight is that you please pray for Judge Barrett and her family.

Every day, if possible. If history has taught us anything (Remember Brett Kavanaugh?), it’s going to get very ugly. The very best thing we can do is pray for the intercession of all the angels and saints to protect Judge Barrett and her family in the coming days and weeks.

Finally, as you might imagine, we weren’t expecting this. We already have our massive election effort underway, and now will engage in this historic confirmation fight. How could we not!?

I am going to need your support to pull this off, too.

If you can chip in, we’ll put your gift to work immediately.