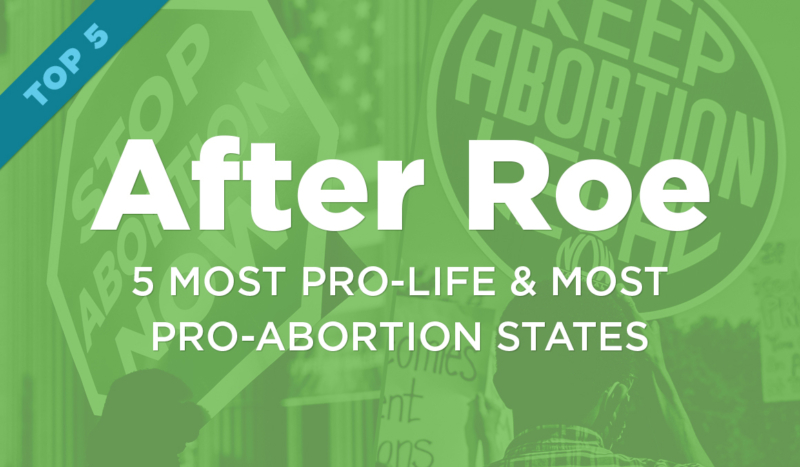 America’s 5 Most Pro-Life … and Most Pro-Abortion States

Roe is dead, and with the Dobbs decision the power to regulate abortion returns to the states.

The policy debate is open again for the American people.

In the most pro-life states, Dobbs changes everything as abortion bans kick in and legislation protecting unborn life gains its rightful authority. All Americans of good will can rejoice and focus their efforts on supporting women and their children from the moment of conception until natural death.

In other states, on the other hand, Dobbs changes nothing for women and unborn children. Many states have enshrined an unlimited abortion license into their constitutions. Catholics in these states must continue to strive to change the laws – and the hearts of their fellow citizens – until abortion becomes unthinkable.

Here are 10 of America’s most pro-life … and pro-abortion states.

We looked at two factors: (1) a Pew Research poll of the state’s citizens to ascertain how they think about unborn life and (2) how the state’s leadership and laws are supportive of – or deadly for – pregnant women and unborn children.

To find out what YOU can do to help end abortion in all 50 states, check out our article “6 Ways Catholics Can Help After Dobbs.”

58% of Alabamians believe abortion should be illegal in all or most cases, and their state laws reflect the public consensus. Planned Parenthood’s research arm, the Guttmacher Institute, lists Alabama as one of the most “restrictive” states when it comes to abortion.

Waiting periods, parental consent requirements, and ultrasounds help make sure women seeking abortions are fully informed – and the state passed a 6-week “heartbeat bill” in 2019 that will end almost all abortions now that Roe is history.

In Arkansas, fully 60% of its citizens agree that abortion should be illegal in all or most cases. Its laws reflect that: in February 2022, the Republican-led legislature passed a bill outlawing abortions once a heartbeat can be detected. This effectively ends abortion in the state, since most women don’t even know they are pregnant until well after medical technology can detect a heartbeat.

Lousiana may well be one of the most pro-life states in the country, with 57% of its population opposed in abortion in all or most cases.

On the policy front, Guttmacher had one sentence to sum it up for Louisiana:

“Abortion would be banned if Roe v. Wade were overturned.”

The home court of the Dobbs case, Mississippi’s leadership is 100% pro-life, and its electorate is 59% in favor of restricting abortion in all or most cases.

Attorney General Lynn Fitch did her state proud in 2021, when she took the Dobbs case to the Supreme Court and argued not only for Mississippi’s right to regulate abortion but also for the complete overthrow of Roe v. Wade:

“In the Dobbs case, we’re defending the right of the people to engage in a healthy political discourse about how we as a society should care for women and their children.”

58% of West Virginians believe abortion should be illegal in all or most cases, and they vote to make it so. 98% of West Virginia counties have no abortion facilities, and in 2022 the legislature passed a bill banning abortions after 15 weeks. Additionally, it passed a bill specifically forbidding an abortion due to a diagnosed disability: the “Unborn Child with Down Syndrome Protection and Education Act.”

To date, eleven states have passed legislation known as “heartbeat bills” that effectively outlaw abortions. While their citizens may not be as staunchly pro-life as those in our “Top 5,” these states still deserve an honorable mention – and a congratulations on the end of Roe!

Although at 57% of popular opinion supporting unlimited abortion “rights” doesn’t actually make California’s population the most pro-abortion, its “safe haven” laws certainly secure its status as one of the country’s most pro-abortion states.

Governor Gavin Newsom has declared California a “safe haven” for abortionists whose “activities” have been outlawed in their own states as well as for women seeking abortions.

Pro-life adocates have an uphill battle in the Nutmeg State.

Not only does 67% of the state’s population believe in unlimited abortion access through all nine months of pregnancy, but the state’s legislature also voted in 1990 to protect abortion as a fundamental right under state law. In 2022, the legislature passed a bill adding the “right” to the state’s constitution. Connecticut also allows nurses, “midwives,” and physician’s assistants to perform abortions.

No surprise here. 74% of Massachsetts citizens believe abortion shoudl be legal in all ro most cases. Between 2014 and 2017, the number of abortion “clinics” in the state grew by 36%.

70% of Vermonters support abortion in all or most cases, and the state is one of the deadliest for an unborn child. According to the Guttmacher Institute, 1,300 abortions were procured in Vermont in 2017. For perspective, only 5,655 infants were born alive. That means 19% of unborn children were killed that year in a state that is literally dying.

Vermont does not have any of the major types of abortion restrictions—such as waiting periods, mandated parental involvement or limitations on publicly funded abortions—often found in other states.

Culturally, DC is pro-abortion. 70% of residents believe abortion should be available for any reason, and the laws allow for abortion at any point during pregnancy.

Washington, DC, won’t even enforce the few restrictions that are in place on late-term abortions. When pro-life activist Lauren Handy obtained five corpses of late-term aborted children, the Metro Police took the bodies and refused to investigate.

While these states have more pro-life citizens (and so didn’t ‘earn’ a spot in the Top 5), it is worth noting that – like Vermont – their state laws “protect abortion rights” even after “fetal viability.”