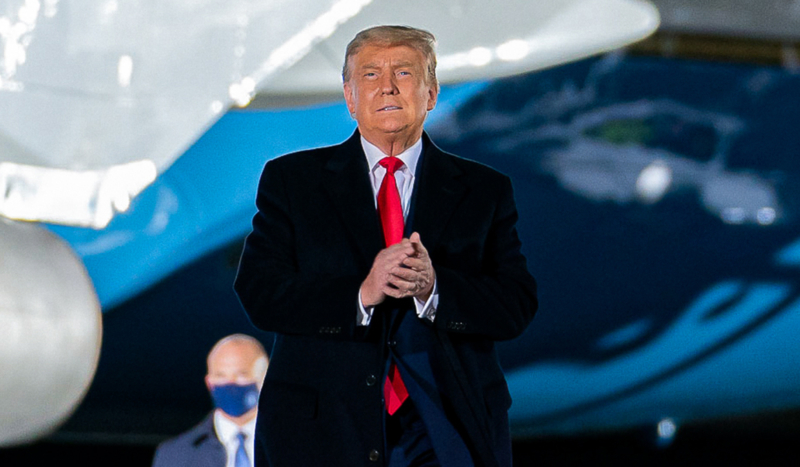 The election site FiveThirtyEight says Trump has only a 12% chance of winning.

The Economist puts it at 5%.

Haven’t you seen this movie before?

As you likely remember, the New York Times had Hillary Clinton’s odds of winning at 85% in 2016. These big “woke” media corporations are hoping to convince voters like you that it’s all over.

I’ll explain below why I think the media is getting this campaign wrong (again!). But first, here are three important ways you can fight back:

So about those polls…

To paraphrase Groucho Marx: “Who are you going to believe? The media or your own eyes?”

Trump rallies continue to draw massive crowds. Boat parades, car parades, even a spontaneous rally in Beverly Hills last weekend suggest Trump enthusiasm is massive. Even the media agrees there is a sizable silent Trump vote. How big is it? Nobody truly knows.  But it’s not small.

Meanwhile, Joe Biden planned to spend the final week in his basement. That is until yesterday — when he made a “surprise” appearance in Pennsylvania to read directly from prepared remarks in front of almost nobody. Peggy Noonan, no big Trump fan, made this interesting observation: “…in a lifetime watching politics, sometimes up close, I have never seen crowds keep away from someone they love. They’ll come whether you want them or not; they’ll find out you’re coming and stand at the side of the road to cheer as the motorcade goes by.”  Biden enthusiasm is non-existent.

So how does this translate in the real data now available?

Consider: Democrats have counted on absentee and early voting advantages going into Election Day. The media flooded us with images of long voter lines. But the latest data is eye-opening. For example, in Florida, Dems surged to a nearly 500k-vote advantage in vote-by-mail and in-person early voting. But that gap has evaporated, with a massive GOP surge underway. The Dem lead is projected to be less than 200k votes by tonight, with some 40k net new GOP votes today alone. The Biden advantage in Florida is collapsing.

Or in Michigan … according to NBC, requests for early and mail-in-ballots are up nearly 200%. And as of today, Republicans lead 41-39 in ballots returned.

In fairness, the President is underperforming among women and older voters, according to these same polls. But these data points only make the case that this election is unlike any other. Pollsters claiming to know with certainty what is going to happen are lying. Left-wing media corporations are stuck: they can’t disappoint their customers.

And our surprise prediction: keep your eye on Nevada. Hispanic Catholics are surging for Trump.

Lastly, our internal Catholic tracking metric has shown Trump with 5 straight days of gains — hitting his highest approval in the last 90 days.

…the state experts say gives Trump a 70% chance of re-election if he wins it.

Your final donation today is likely headed to Pennsylvania.