8 Catholic-Run Breweries & Wineries in the USA 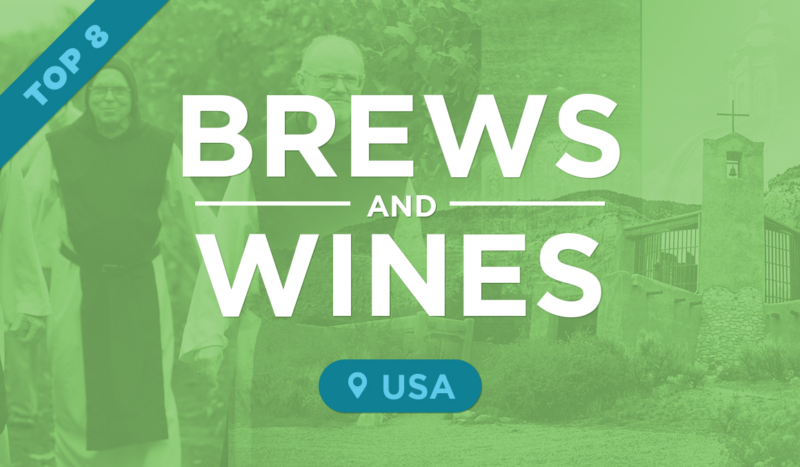 “Drink no longer water, but use a little wine for thy stomach’s sake and thine often infirmities.” (1 Timothy 5:23)

A healthy enjoyment of the good gifts of God’s creation – including fermented fruit juice – is a hallmark of Catholic culture. Check out these Catholic-owned breweries and wineries right here in America where you can enjoy the fruit of the vine while supporting Catholic monks, nuns, and families. If you have a favorite libation not mentioned here, please leave a link in the comments below!

And remember: moderation in all things, except in love of God!

The Trappist monks of Spencer, MA, boast the only Trappist brewery in the United States – one of just ten official Trappist breweries in the world! Offering a variety of ales and craft beers (including a fruit series), Spencer Brewery brings to America the storied tradition of monks brewing the world’s finest beer.

With a motto like “Pray, work, brew,” what could go wrong? The Catholic-owned St. Benedict’s Brew Works sits in the lovely hills of Indiana and offers its own delicious craft beers as well as an on-site restaurant. It’s also the only brewery on the grounds of a women’s monastic community in the United States! Proceeds help support the Sisters of St. Benedict in their life and apostolate.

The Benedictine monks of Subiaco Abbey in Subiaco, Arkansas, not only work to preserve the history of German Catholics but also the legacy of German beer brewing at Country Monks Brewing. All profits from the sale of their specialty craft beer goes to the care of the elderly monks, and their Tap Room is open every Saturday. The monks also make a wicked hot sauce to dip your wings into, as well as a peanut brittle for dessert.

The Benedictines at the Monastery of Christ in the Desert (Abiquiu, New Mexico) follow the Benedictine Rule and ora et labora. Their labora includes growing hops in the Chama River Canyon and working with local brewers at Absolute Beer to produce craft beer in the European monastic tradition.

Jason Elk started Karetas Brewing as a fundraiser for charities – and has produced world-class beer along the way. 10% of the proceeds go to charities of Elk’s choosing, and each style of beer supports a dedicated cause. Enjoy the fruit of the earth while serving the homeless, veterans, children, and more!

Like their beer-making brothers in Spencer, MA, the monks of Our Lady of New Clairvaux draw on a viticultural history dating back over one thousand years. In collaboration with Aimee Sunseri, a fifth-generation Napa winemaker, the monks have won numerous awards both nationally and internationally for their vintage. Their recently-expanded tasting room is open seven day a week for visitors, and the adjacent Abbey offers retreats and day visits.

Situated in the breathtaking heart of Granite Bay, Mount Saint Joseph Wines was founded by local parishioners of St. Joseph Marello in conjunction with the Oblates of St. Joseph. The winery beautifies the Oblates’ property while providing income for the priest’s seminary and youth services.

Founded in 2002 by Tim and Stephanie Busch, Trinitas Cellars sits on the Meritage Resort and Spa in Napa, California. Each year, the Meritage hosts the Napa Conference, America’s largest gathering of Catholic leaders and prelates known for their fidelity to Church teaching on faith and morals. According to the website, their “goal is to craft wine that’s so compellingly delicious, that the joy it brings creates a window in time where worries are melted away, virtues are celebrated, and life is savored.”

Do you know of any other Catholic-owned breweries or wineries? Leave a link in the comments below!