6 Common Pro-Roe Arguments (and how to refute them) 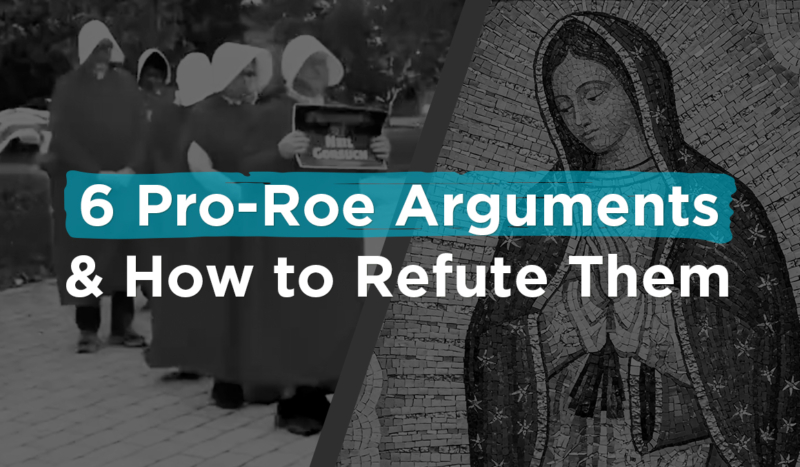 With the end of Roe vs. Wade expected any moment, the radical pro-abortion rhetoric has stepped up. It seems like everywhere you turn, angry Leftists are arguing that the Supreme Court has put minority lives in danger, that abortion is necessary for women’s rights, and that the “right to privacy” is the bedrock of America.

Here are six pro-abortion-rights arguments being used right now – in order from the least to the most insulting to women — and how to answer them!

“Staying pregnant is more dangerous than having an abortion,” claims sociologist Amanda Stevenson in a recent USA Today article. In other words, abortion is medically necessary in many cases to save the life of the mother.

Pro-abortion rhetoric tries to make you think Roe vs. Wade is saving lives because most abortions are about the health of the woman.

But today we know only a small percentage of abortions occur because of concerns for the mother’s health. How do we know that? Because Planned Parenthood’s own research arm, the Guttmacher Institute, concluded as much.

In one Guttmacher study, only 3% of women sought abortion because of a concern for their own health. The highest estimates for “health of the mother” as a reason for the abortion are at 12% – but that number includes concerns as wildly divergent as cancer diagnoses, morning sickness, and fetal diagnoses.

That holds for all three trimesters. The truth is that most abortions in America have nothing to do with the health of the mother.

The fact is that abortion is never medically necessary to save the life of the mother, and pro-lifers should never concede this assumption.

There are procedures that are not abortions, such as pre-term delivery, that result in the pre-term separation of the fetus from the mother and thus the unintended death of the child. The Catholic Church allows these practices (homework: research the Catholic concept known as the principle of double-effect), but never the direct termination of the unborn child.

For more information on saving the life of the mother without resorting to the direct murder of her child, check out this statement from the American Association of Pro-Life Obstetricians and Gynecologists:

Healthcare workers and activists who who claim abortion is ever necessary for the health of mothers are promoting lazy thinking – and that’s a threat to women’s health.

If you hadn’t heard of the Handmaid’s Tale before, you have now. Hundreds of pro-abortion demonstrators are claiming that, like the rape victims in Margaret Atwood’s dystopian novel, American women will now be forced to bear the children of their tormentors for the glory of the fatherland.

Pro-lifers aren’t arguing that women should be “forced to give birth.” American women aren’t captive handmaids. In fact, according the Guttmacher Institute – again, Planned Parenthood’s own research arm – rape accounts for less than 1% of abortion cases.

Sex is, for the vast majority of women seeking abortions, a consensual activity. And sex makes babies. In the normal course of things, a pregnant woman will eventually give birth. Claiming that repealing Roe or passing pro-life laws puts women in danger of being “forced to give birth” is illogical and duplicitous.

In fact, both parents involved have a responsibility to care for the human life that results from their intercourse – at least until such a time as they can consign the child to the care of adoptive parents.

In the same way, our child support laws (which ought to be rigorously enforced) assume that by virtue of engaging in sex, a man is responsible for a child. The woman is also responsible for the life she helped create.

“Consent” might be complicated, but one fact is very simple.

The unborn child has a moral claim on his mother’s body by virtue of its equal human dignity and the fact that, without the mother’s womb, it will certainly die. But within the mother’s womb, the child may** live and grow to be independent of her body. If a more vulnerable person depends on me for her very life, then I have a natural moral obligation to sustain her life while I am able.

**There is still a high probability that the pregnancy will end in miscarriage and a very small probability that in order to save the life of the mother, pre-term delivery will result in the death of the child. But the point stands: direct and lethal violence against the child is a terrible wrong.

If a woman didn’t consent to the sex, the argument goes, then she should be able to choose to end the pregnancy that results.

False, due to bad moral reasoning.

In this case, a grave injustice and violence has been done to the woman. Our laws should acknowledge that and our communities should support her in her recovery from that trauma. Men who rape women should receive the highest penalty under the law – castration and penal servitude come to mind.

That being said, one grave crime does not give the victim the right to commit another grave crime.

As with the “forced birth” argument,” pro-lifers should insist that the unborn child – whether a product of consensual sex or of rape – has a right to grow in his or her mother’s womb until he or she reaches viability and the woman can – if she wishes – safely entrust the baby to someone else.

By virtue of being the parent – regardless of how that pregnancy came about – the biological mother has a responsibility to care for her dependent child, who is innocent of any crime.

Human beings have a moral responsibility to help the vulnerable – rape is wrong because a vulnerable party is attacked by a stronger party. The same moral principle applies with abortion.

This doesn’t minimize the gravity of sexual assault. But when injustices happen, they are never undone by further injustices.

This argument goes: Fine, it’s really a baby. But it still has no right to “use” its mother’s body!

Some debate strategists have called this the strongest argument for abortion “rights,” but it might just be the strongest philosophical argument.

Meaning, it won’t make any headlines.

Long gone are the days when pro-abortion rights activists protested that “the embryo isn’t human yet!” Science and ultrasound technology have made that assertion less and less palatable to the average American.

So now they have changed their tune and will agree that yes, the embryo is in fact a human being. But then they insist that there are circumstances in which it is morally good to terminate that person’s life.

An unborn child doesn’t have the right to “use” the mother’s body to stay alive, they argue, so the mother can in all good conscience “unplug” her child.

These arguments are dangerous, because they start with what seems like a concession (“Sure! The unborn baby is a baby!”) but end with a horrific conclusion (“You can kill dependent people!”).
The truth is that the unborn child does have a right to his or her mother’s womb. See the arguments against “forced birth” and cases of rape above.

The argument states: Women need abortion in order to be equal to men. If you take away abortion, you’re making women into second-class citizens again.

First, in an age where the male-female binary is under attack by trans activism, it’s fascinating that the pending end of Roe vs. Wade would inspire a sudden rediscovery of the fact that men and women are different.

The question isn’t really about abortion. It’s about how we respond as a society to the fact that men and women have sexual and reproductive differences that – try as we might – we just can’t make go away.

The feminism of the 1960s decided that through widespread contraception and unlimited abortion access, America could change that basic fact and eliminate those differences.

The theory goes: If we can separate baby-making from sex and if we can kill off the accidental babies that do pop up now and then, women could be just like men.

Have sex for fun, and walk away with no consequences.

The problem is that this kind of thinking puts all the burden back on the woman. Because sex still makes babies (the Guttmacher Institute reports that over half of the pregnancies in the U.S. this year will be unintended). And when she gets pregnant, the woman – not the man – has to commit an act of lethal violence in order to maintain her “equality.”

She has to make the decision to end her child’s life, inject herself with contraceptive hormones, and live with the aftermath of the dead child.

And that’s hardly an equality any woman should desire.

What if, instead, women turned around and demanded chastity from men? What if they demanded that biological fathers paid meaningful child support? What if public policies required both the man and the woman who had produced the child to act like parents?

The Left’s proposed “equality” is anything but – and the result is a whole mountain of dead babies and generations of hurt women.

False and most insulting to minority women.

This one wins the prize for “most insulting” because it assumes that easy access to abortion helps under-served minorities. It doesn’t. It only offers America’s most needy mothers one option: kill your child.

Let’s get back to the Vox quote and note several loaded words in their claim.

Pro-lifers should not concede this point, but turn it around and point out that the unlimited abortion license has disproportionally harmed – as in, killed – members of black and Hispanic communities. According to the Guttmacher Institute, the abortion rate among black women is five times the rate among white women, and the rate among Hispanic women is double that of white women.

In New York City, more black babies are aborted annually than are born. And there is ample evidence from the history of pro-abortion politics and institutions that this was one of Planned Parenthood’s primary motives for promoting abortion in the first place.

As for the charge that women in minority groups face “more obstacles” accessing alternative options – that is a problem pro-lifers have been leading the charge to solve since before Roe.

Pro-lifers should keep a ready list of local support services constantly in their phones, wallets, and cars in order to be able to help expectant women they encounter and thus disprove this charge with real, local data about trusted resources in their area.

Searchable databases of these resources  can be found here, here, and here, to list only a few.
If anyone tells you minority women should have unlimited license to abort their children because they don’t know about other options, your best (and most obvious) response is to give them an easily accessible list of … those other options.

Finally, the best pro-life response to the pro-Roe Left is of course prayer. Because our struggle is not against “flesh and blood,” but with an evil that has sought the blood of children since the beginning of human history.

And for 2,000 years, the Catholic Church has come to the aid of mothers and their children. We should be unafraid to claim that heritage and stand strong for the most vulnerable among us today.