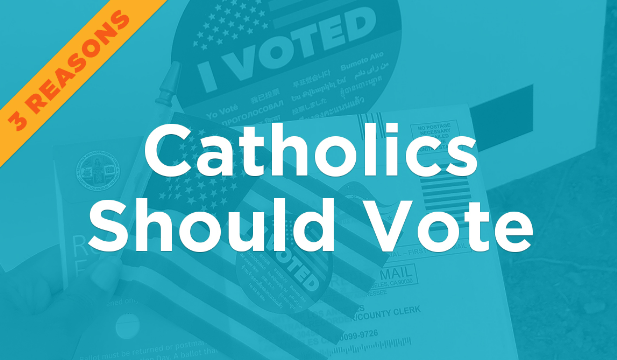 In less than three weeks, Americans will head to the polls in what promises to be an historic midterm election.

While voter turnout is almost certain to be lower in this non-presidential election year, Catholics still have a moral obligation to get to the polls.

Here are three reasons every Catholic should make plans to vote on November 8th.

AN ACT OF SOLIDARITY

With every vote we cast, we actively shape our society and promote the common good. We have the profound privilege in the United States of directly selecting our political leaders.

They in turn look to us, their constituents, for direction as they form our public order.

Catholic voters don’t simply exercise a radical individual right or “make their voices heard,” as if we were all isolated individuals acting for ourselves alone.

We vote for the sake of our neighbors. We vote in solidarity with the poor, the unborn, and the most vulnerable. Catholics who vote with a well-formed conscience are protecting their dignity, fostering growth, and promoting the common good.

In other words, it’s not about us.

God commands you to choose for rulers, just men who will rule in the fear of God. The preservation of a republican government depends on the faithful discharge of this duty; if the citizens neglect their duty and place unprincipled men in office, the government will soon be corrupted.

If we don’t vote, we fail to bring the great gifts we have as Catholics to the public square… a true understanding of the human person, freedom, and the justice of God.

And we leave the construction of our political order to others.

The 4th Commandment, “Honor thy father and thy mother,” includes appropriate honor for all those in authority. Americans are under the authority, not of a king or tyrant, but of our particular system of government, with its checks and balances, division of powers, and elected representatives.

Submission to authority and co-responsibility for the common good make it morally obligatory to pay taxes, to exercise the right to vote, and to defend one’s country.

Catechism of the Catholic Church, no. 2240

When we participate in an election, we are honoring God’s design for our lives. We are accepting our responsibility to act in the time and place he chose for us – the twenty-first century United States of America.

It is the duty of citizens to contribute along with the civil authorities to the good of society in a spirit of truth, justice, solidarity, and freedom. The love and service of one’s country follow from the duty of gratitude and belong to the order of charity. Submission to legitimate authorities and service of the common good require citizens to fulfill their roles in the life of the political community.

The Commandments are the guidelines for us as individuals and as a society to promote goodness, justice, and abundant life. It is our duty to participate in the building up of our nation in all ways available to us – and for Americans, that means in part getting out to vote in every election.

Voting and political action is one way that the Catholic laity in particular participate in the Church’s work of evangelization. And when we vote according to our faith and right judgment, we sanctify the local, state, and national public squares.

Our vote can hold corrupt politicians accountable for their betrayal… by firing them.

And, while not every alternative is an ideal statesman or woman, the fact that we voted for them gives us leverage to demand they become better.

Some Catholic voters might be discouraged – particularly in areas where election results seem to be foregone conclusions. We might feel little motivation to vote: “What can one vote do in the face of so much evil?”

But as Catholics, we know that nothing we do is in vain. We will bring about change when we are faithful in small things – when we faithfully vote and work for a better society by every means at our disposal.

We were born for this moment and in the faithful fulfillment of our duty to vote, we will be victorious over our own despondency and all the lies that say “it doesn’t matter.”

Elections have very real consequences for how well a society is able and willing to serve the poor and the most vulnerable among us. God gave us this time, this political moment in which to act. As lay Catholics, we have a duty to vote, stand in solidarity with the poor, and sanctify this great nation.

You’re most likely to vote if you have a voting plan! Find your polling location for November 8 here.