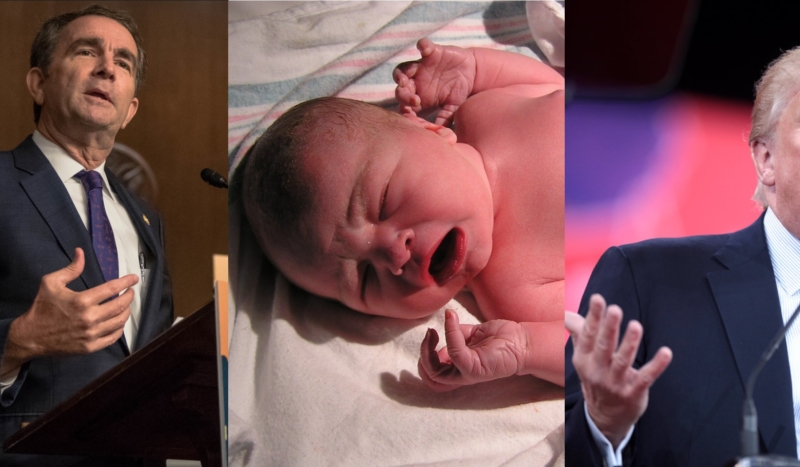 12 media outlets are slamming President Trump’s most recent remarks on abortion and infanticide as “dangerous lies.” But his comments aren’t so different from those of Democratic Virginia Governor Ralph Northam – who the media vigorously defend.

Democrats “are aggressively pushing extreme late-term abortion, allowing children to be ripped from their mother’s womb right up until the moment of birth,” Trump warned at a Wisconsin rally. “Your Democrat governor here in Wisconsin shockingly stated that he will veto legislation that protects Wisconsin babies born alive.”

Earlier that week, Governor Evers called the born-alive bill needless because of “existing protections,” and warned that it “could send doctors to prison for life if they fail to give medical care to babies born alive,” the Associated Press reported on April 23.

But pro-life leaders, such as Wisconsin Right to Life executive director Heather Weininger, stressed that this bill, AB 179, is “not the same” as past ones.

The bill “will help health care providers understand the degree of care they must offer,” she stated in a press statement on April 23. The new legislation will also “give guidance” for reporting violations to the “appropriate law enforcement agency.”

The media focused on President Trump’s description of such a situation.

“The baby is born. The mother meets with the doctor. They take care of the baby. They wrap the baby beautifully. And then the doctor and the mother determine whether or not they will execute the baby,” the president said.

In response, outlets raced to condemn the president for his “dangerous abortion lies” and “falsehoods.” At least twelve headlines accused Trump:

The Cut: “Trump’s Lies About Abortion Keep Getting More Disturbing”

GQ: “Why Trump Can Lie to His Base About the Nature of Abortion”

The Guardian: “Lies, damned lies and Donald Trump: the pick of the president’s untruths”

Mother Jones: “Trump Has a New Go-To Lie About Abortion, and It’s Horrific”

Refinery29: “Trump Told Another Lie About Abortion At His Wisconsin Rally Last Night”

But Trump’s comments didn’t come out of thin air. He pointed to Governor Northam, a trained pediatric neurologist, as his inspiration.

In January, the Virginia politician shocked Americans after suggesting leaving babies to die after birth in an interview. In his own words:

In Wisconsin, Trump said of Northam, “Until this crazy man in Virginia said it, nobody even thought of that.”

Here are Trump’s and Northam’s words, side by side:

Northam: “The infant would be delivered.”

Northam: “The infant would be kept comfortable.”

Trump: “They take care of the baby. They wrap the baby beautifully.”

Northam: “The infant would be resuscitated if that’s what the mother and the family desired, and then a discussion would ensue between the physicians and the mother.”

Trump: “And then the doctor and the mother determine whether or not they will execute the baby.”

The majority of the outlets criticizing Trump didn’t even cite Northam’s full comments. And when they did, they defended him.

For example, Vice provided this excuse for the governor: “A spokesperson for Northam later clarified that the governor was referring to the ‘tragic and extremely rare case in which a woman with a nonviable pregnancy or severe fetal abnormalities went into labor.’”

Even so, according to his own words, Northam was talking about a baby – a born baby – for whom resuscitation is a possibility.

“Executing” a baby isn’t the exact same thing as leaving a baby to die when it has a chance at surviving.

But the similarity is unmistakable: both actions are barbaric.