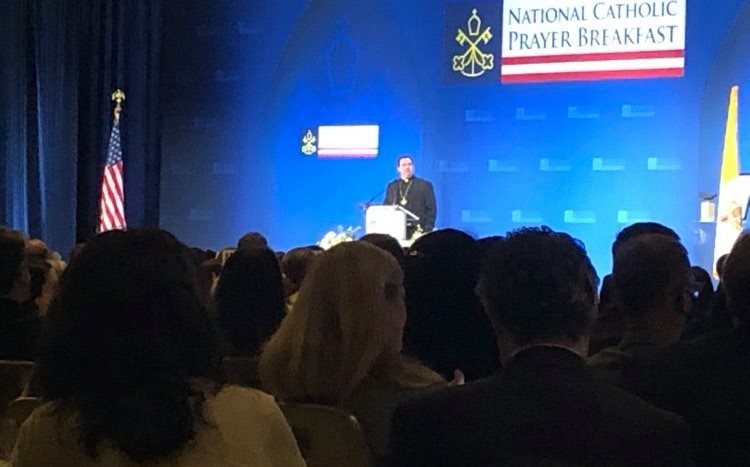 Keynote speaker Bishop Steven Lopes told the 17th annual gathering of more than 1,000 people at the Marriott Marquis Hotel in Washington, D.C., that this theme conveyed a bit of irony in light of Wikipedia labeling the NCPB a partisan event.

“In fact, such divisions have so hardened that even something like a prayer breakfast can be called ‘partisan,’ or at least so declares a new article in American Public Life about us this morning,” Lopes said. “Wikipedia. Although taking on the theme of unity is perhaps the rhetorical equivalent of running with scissors, we have to do it. We have to do it because the gospel says we have to do it.”

Noting that he understands unity from leading the Personal Ordinariate of the Chair of St. Peter, a sprawling jurisdiction for former Anglicans who came into communion with Rome, the bishop added: “For Catholics, the gospel demands conversion. As Americans, the liberties we enjoy and the ideals that found our democracy demand that we fight for national unity, and by this I mean real unity, something more than the superficiality of a group of like-minded individuals acting in roughly the same way at approximately the same time.

For spiritual guidance in these times, Lopes also quoted Pope Pius XI in saying that the many political parties do not have any “real difference concerning public good” or the search for the common welfare, but simply have a shared desire for power.

“You see, the pope is calling out ‘wokeism’ before we even had the word,” Lopes said, eliciting laughter.

Lopes also quoted Pope St. John Paul II to the effect that the unity of the Holy Trinity of Father, Son, and Holy Spirit serves as the model for what Catholics must bring into a divided world.

“So why should we care about unity in the first place? Because we’ve been made this way. Because as Catholics we know that in baptism we received a vocation to make God present in the world by manifesting God’s holiness, the God who is one and three,” Lopes said.

As a sign of the event’s theme of unity, Wall Street Journal columnist and editorial board member William McGurn accepted the NCPB’s Christifidelis Laici on behalf of Hong Kong media entrepreneur Jimmy Lai, currently imprisoned in Communist China and facing a life sentence without parole for participation in two “unauthorized” pro-democracy demonstrations in 2019.

“The mission of NCPB is simple: To gather not as members of one political party or another, but as brothers and sisters in Christ, to pray for our country, our church, and one another,” Randall told the crowd.

Serving as one of six event co-sponsors, CatholicVote.org was also present at the event, showing a video trailer for its new Edify digital education initiative as well as distributing printed materials on it.

Co-founders Josh Mercer and Brian Burch were both present with a table among various event exhibitors.

Despite being virtual, Randall said in his welcome remarks that last year’s 16th annual prayer breakfast was viewed by more than 400,000 people, offering a sign of hope in a dismal year.

“The last year and a half has been difficult to say the least,” Randall said, noting that many people had lost loved ones.

The first NCPB in 2004 featured Cardinal Avery Dulles, S.J., HHS Secretary Tommy Thompson, and Senator Rick Santorum as speakers, among others. President George W. Bush addressed the gathering in 2006 and 2007; Vice President Mike Pence did so in 2017.

In spite of this year’s emphasis on unity in Christ, however, American Conservative Union Chair Matt Schlapp noted on Twitter the conspicuous absence of the nation’s two most prominent Catholic politicians: House Speaker Nancy Pelosi (D-CA) and President Joe Biden, both of who dissent from church teachings on abortion.